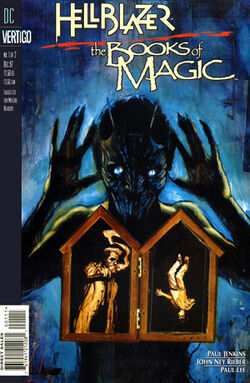 Tim Hunter and his fellow summer school mates participate in a time capsule experiment, but before burying capsules of their own, the children open capsules buried thirty years previous. Tim is given a bland cardboard box with a weird triangular drawing on the lid - weird not only in appearence but also in it's similarity to a similar doodle Tim had been working on moments before receiving the box. Opening the box, Time finds a small toy house attached to a piece of string. Intrigued, Tim sneaks the trinket out with him when he leaves.

Meanwhile, John Constantine is starting to suffer flashbacks to some of the more harrowing moments in his childhood. Tim takes some time out in a public park to further investigate the house. After some fiddling, the house opens to reveal a drawing of a figure standing inside a design similar to the one seen earlier on the lid of the time capsule. A demon, disguised as an old homeless man, tries to get Tim to give him the paper but Tim refuses, opting instead to give him a pound.

The following morning, Tim works some magic over breakfast, causing his cereal to spell out an address. Tim says a quick goodbye to his father before setting off. It turns out however that the demon had disguised itself as Tim's father and with Tim gone, it investigates his breakfast in a vain bid to discern Tim's destination.

Retrieved from "https://hellblazer.fandom.com/wiki/Hellblazer_The_Books_of_Magic_issue_1?oldid=8181"
Community content is available under CC-BY-SA unless otherwise noted.