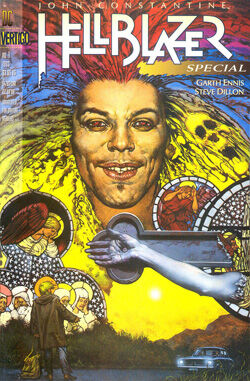 John Constantine: Hellblazer Special #1 (October 1993) Set before John's fall from grace: an insane, paedophilic priest and our favourite conman are forced into meeting by The First of the Fallen.

Whilst making his way home from a cigarette run, John is stunned to spot a figure from his past. Obviously distressed at the sight of this man, he follows him to a nearby church before confronting him. John reveals how he met the man as he hitch hiked down to London near the end of the sixties. The man had tried to sexually abuse Constantine who escaped and turned him in to the police. The man is now seeking to tell his confession and John agrees to listen.

The man starts by revealing that he used to be a priest, a priest who had become embittered with the size of his task in a world which was slowly sliding down the toilet. His methods became more and more erratic - when a woman confesses to having made love to her younger brother (during a drug induced orgy) he snaps and starts to beat her - his angry rage was interrupted by The First Of The Fallen who reveals that Jesus is destined to be born in LA and to run with a gang before telling his confession to the priest. Already on the brink of insanity, the First’s confession drives the priest over the edge and his methods become even more extreme - violence being replaced by killing.

Shortly after this, he met Constantine and was then arrested for his attempted assault on the young boy. The former priest spent twenty years in a mental institute, each night he was visited by The First who reminded him of what he said in the confessional. The priest then reveals that just under a short ago The First came to him and told him he was cured. As John turns to ask the priest what The First’s confession was, the priest drives two pencils into his eyes.

A somber Constantine realises that The First intended the priest to be a messenger to John, to let him know that The First would soon be coming for him and that before he dies, he too will hear The First’s confession.