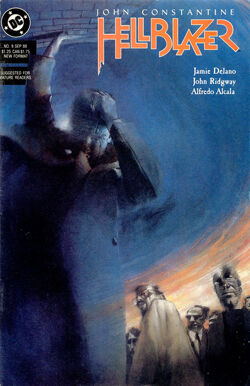 "Heroic bloody Captain goes down with his ship, eh? You selfish, spineless git! What right have you got to just down tools and quit?"
―John Constantine

John Constantine walks the back streets of Gotham City. Tired and unkempt, he passes by an apartment complex in the process of being demolished and sees a man attacking a woman. He stops inside of a bar and orders a drink. He sees a local copy of the Gotham Gazette and realizes with some distress that it is 35th birthday.

The ghosts of old friends and acquaintances appear, congratulating him on his birthday. Feeling responsible for their deaths, John begins yelling at them. The bartender can't see the spirits, of course, and tosses John out on his ear for causing a ruckus and being a drunk. Ray Monde's ghost is the only spirit that follows after him, but John tells him to leave him alone. Ray tells John that the infusion of blood he received from Nergal has given him a sort of "psychic poisoning," which he should be careful about spreading. Not wanting to hear it, John yells at Ray and takes off.

Alone again, John rents a room and contemplates his misery. A pile of dirty clothes begins moving by itself, pantomiming the movements of a human being. The being inhabiting this "clothes-man" begins chasing John, who runs out into the night. Finally, John stops at the demolition site he had seen earlier and sits down to rest. He doesn't seem to care that the building is still in the process of being destroyed by a wrecking ball. Suddenly, black tar from the walls begins stretching forward, as if to attack him. John flashes his cigarette lighter at the goo, and escapes.

The mysterious spirit plagues him, taking the form of an ambulating pile of newspaper, and chasing him further down the street. It later causes dollar bills to spring from a cash register that swirls all about him.

John eventually returns to the partially demolished building and sits on an old sofa. Another spirit appears before him. It is actually John's subconscious mind trying to deal with all of his recent pain and guilt. The spirit admonishes Constantine for feeling sorry for himself and tells him that it's time to get his act together. The "tough love" approach appears to work, and John cleans himself up. He scores a few dollars from a back alley craps game and books a flight back to England.

He goes to Glastonbury where he finds Zed wandering alone in a field. He beckons her inside the bole of a large tree and the two make love. John feels that if he taints Zed with his demonic stain, then the Resurrection Crusaders will no longer desire her. Afterwards, and unaware of his deceit, Zed lies down to rest and John leaves.