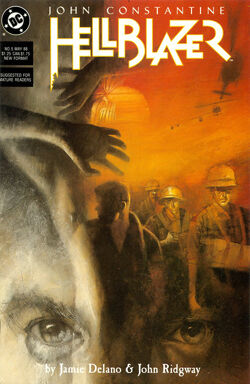 John Constantine: Hellblazer #5 (May 1988) Denizens of a small town in Iowa, with the help of The Resurrection Crusade's Pyramid of Prayer scheme, summon their long-lost relatives who died in the Vietnam War. John Constantine, on the trail of The Crusade, witnesses history repeating itself.

On August 10th, 1968. in Quang-Tri province in Vietnam, a company of U.S. marines, led by Lieutenant Frank Ross, are trekking through the jungle, silently following the midless drone of their marching song. Sudden rustling alerts them to a potential ambush, and private Craig Anders leads the company into combat, guns blazing.

On August 10th 1987. on a road outside Liberty, Iowa, old Willy Anders is setting up a sign that says : "LIBERTY WELCOMES HOME HER BOYS", when he hears a sudden rustling in the corn fields. Expecting that the power of prayer scheme promoted by The Resurrection Crusade has worked, and that his long-lost son has returned from the war. Calling for him, he comes face-to-face with private Craig Anders and his company, who are shown within the backdrop of the Vietnam war. Charlie Anders mows him down with several shots from his M16.

Back in Vietnam, Charlie Anders kicks the body of the dead vietnamese old man he shot, checking for signs of life. He is briefly isturbed by the thought that the old man looked like his father, but such notions are immediately dispelled by Lieutenant Ross, who instructs the company to move out.

In 1987. on a gas-station next to the Interstate, middleaged war-veteran Frank Ross is drinking himself into stupor, haunted by the memories of the war, and guilt that he was the only one from his company, consisting solely out of young men from Liberty, who came back from Vietnam, and although thought of as a War hero, he hides the truth about all the atrocities he has seen, condoned and committed. His guilt is enhanced by the fact that he is the only one from Liberty making any money from the Interstate that had brought further misery upon the dwindling town.

John Constantine gets out of the bus at the very same gas-station, having come to Liberty to investigate the growing influence of The Resurrection Crusade's Pyramid of Prayers scheme. Upon entering the station, John accidentally wakes up Frank Ross from his drunken dreams of Vietnam. Frank Ross, believing he's still in the war and that John is a member of the Vietcong, starts shooting at him, narrowly missing him. Facing the barrel of a gun pointed at his head, John is saved by the arrival of Frank's wife Nancy, who manages to calm him down and snap him out of his delusion. Apologetic Nancy fills John in on the situation in town, explaining how most of the townsfolk believe that the prayer-time they've bought and all the pyramidal-scheme inducting of people into the Resurrection Crusade will bring their lost sons back home to Liberty, and gives him a ride to her mother's motel.

Taking a stroll through the empty streets of Liberty after settling down in his motel room, John spies upon an argument between Nacy and her mother. Nancy tries to get her mother to understand that prayer can't bring the young men back, but her mother slaps her over the face and scorns her for saying such a thing, since her husband is the one who came back.

Meanwhile, echoing his Vietnam experience, Frank Ross puts on his military gear, preparing to join his comrades in arms. With his old machine gun in his hands, he finds the troops preparing to invade a small village, while'they are simultaneously/actually right outside of Liberty. Frank Ross confronts his guilt about leaving his fellow combatants to die, and promises himself that this time he'll stay with them, choosing both Death and Liberty.

The old townspeople have gathered around a big-screen TV, watching a TV-preacher urging the viewers to pray for the townsfolk of Liberty and the return of their sons. Nancy fills John in on the concrete mechanisms of the Pyramid-scheme the Crusade has been pulling of, channeling people's prayers to conduct miracles, and thus bring even more worshipers to their fold. Suddenly, as the prayers reach a climax, the company of Liberty marines bursts into the room, shooting at the ceiling fan. Realizing that the shit has hit the fan, John decides to leg it.

Seeing only Vietnamese villagers, the time-displaced marines start rounding the people of Liberty up on the town streets, setting fire to their homes. John runs toward the cornfields, and Liuetenant Ross shoots at him, but Nancy once again saves his life by throwing herself over the barrel of the machine gun. Seeing her only as an anonymous "gook", Ross smacks her in the face, and kills an old lady who was pleading to her son Craig, saying he thought she had a grenade. Ignoring the townsfolk and their cries for mercy, he tells the company to move out without him, while he attenmds to some business. He pushes Nancy/Vietnamese girl towards the flaming houses, and surrendering to his darkest needs, herapes her next to a cornfield, deaf to her cries.

Hidden among the cornstalks, John helplessly watches the rape, realizing that the power of hopes and prayers that has brought the two timelines/worlds together is an unstoppable force, and that his meddling would most likely be fatal. As Ross climbs off his wife, while she curses him, a thunderstorm rumbles in the distance. He mistakes the thunder and lightning for gunfire and explosions, and looking in the direction in which his company left, thinks they are done for. Desparately trying to help his comrades, he calls in an airstrike. While he's looking in the sky for the planes to drop their loads, he is confronted with a now-armed Nancy/Vietnamese rape victim. She tries xplaining him her actions, that she intends to kill him to avenge her parents and her brother, but he can't understands her and starts coming at her. She shoots him in the leg, and he points his machine gun at her head and lets out a barrage of bullets. John is still silently spying on them from the corn stalks.

Meanwhile, Craig Anders and the rest of the company, along with their captives, are ambushed by the Vietcong, without a radio to call for backup. Anders, questioning the behavious of his commanding officer and lifelong friend, leads the men in combat. Frank Ross comes to his senses, and finds his wife raped and murdered. He throws up and in a fit of survivor's guilt starts raging against his fate, which has led him to let his men down once again. He shouts at the heavens to take him as well. John apporaches him and in an authoritative voice gives him an order to pick up his gun and join his unit, telling him he has to fight if he wants to die. Ross complies, and walks into the cornfield. John slowly follows him, knowing that however bad the finale might be, he mustn't miss it.

The marines have gathered the townsfolk in front of Ross' gas station. While Ross joins them, John climbs a bridge over the interstate, hearing a truck, or perhaps a plane in the distance. Chanting his marching mantra, Frank Ross opens fire on the oncoming truck, which turns out to be a cistern filled with gasoline. The subsequent explosion echoes the long-gone bombardment of the Liberty marines in Quang-Tri province. While watching from a safe distance, shocked Constantine muses about the cancer of war which has been slowly killing the town for the past nineteen years, culminating in that evening's disaster, and decides to immediately get on the case of The Resurrection Crusade.

The following day, some two hundred miles away, in a small town in Nebraska, Constantine gets out of a car he hitchhiked. Still thinking about the horrors of war, he looks at the store windows in front of him : a firearms store called Gunworld, and a video store which advertises movies about Vietnam with the slogan "Films that show how it really was". Constantine murmurs "I doubt it" and turns away. He sees a war veteran without arms and legs in a wheelchair, who's helplessly looking at his wife and children who are putting groceries in their car. Meeting his gaze, John flashes him a peace sign, immediately regretting it, since the man has no way of returning any sort of gesture. Walking away, John concludes that the previous night he stopped being an observer, and became a witness, wondering where is the court he should present his testimony to.