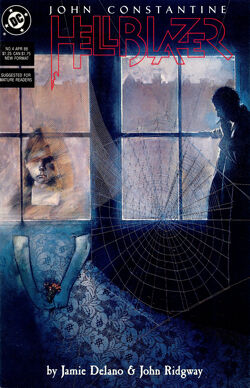 John Constantine : Hellblazer #4 (April 1988)  John chats up a street psychic called Zed , but their first date is ruined when Constantine hears that his niece, Gemma, has vanished. Their hunt for the murderous paedophile is opposed by The Resurrection Crusade, a volatile Christian activist group, and a shadowy collective known as The Damnation Army.

On a hill outside the suburbs of Liverpool, eight-year-old Gemma Masters is fed up. Her parents have recently moved out of the city centre and away from her friends at the behest of their church, The Resurrection Crusade, leaving her cold and alone.

Meanwhile, in London, Constantine muses about his recent lucky streak and how the universe is lining up fortune and synchronicity all around him. After winning yet another game of pool he steps out of the pub, turns a corner and finds himself stood in front of a graffiti mural of a little girl sitting before a sinister silhouette. The artist is a punky young woman with shocks of white running through her black hair.

Back in Liverpool the lonely girl is bemoaning her lot when three other young girls walk up and greet her. She tells them that she lives nearby but that she stays out because her father's angry all the time. The girls say that the man they live with lets them do what they want now that they're married to him. Gemma asks if she can join them and the girls tell her there's only one way to find out.

John is treating the graffiti artist to a meal. He notes that she's not from London and that her name - Zed - isn't much of a name at all. She evades his questions and instead invites him back to her place.

Gemma and the girls approach a run-down house in a wood outside Liverpool. It's in a terrible state but the girls assure her that once she's married she won't notice the smell or the mess. Knowing that The Man won't be back that night, the girls invite Gemma to sleep in his bed. Gemma, feeling tired and a little confused, agrees. As they get in, she notices the rough bruises around their necks. The girls say that they are 'wedding rings' and that she'll get hers soon.

John and Zed make it to her place, but no sooner are they there than the radio blinks into life. Zed says it's a short circuit, but John - riding comfortably on synchronicity - tells her to leave it. A news reporter says that Gemma Masters has become the fourth girl to disappear in Liverpool that month. John reacts to the name and explains that she is his niece!

Back at Gemma's parents' house, her mother - Cheryl - is sobbing into her husband's shoulder. They've turned to Elder Martin, their local minister, for help. He says that members of their cult, The Resurrection Crusade, will find the girl - but says that the child's sin has brought misfortune upon her. Tony agrees, saying that he thinks there's been 'a bad spirit' in the girl ever since they joined the crusade. Cheryl, weeping, runs upstairs as John and Zed continue to rush to her aid.

Gemma wakes and is briefly sad at leaving her parents, but a strange sensation comes over her and she quickly forgets all about them. The girls from the day before return and wrap her in a wedding dress, saying that The Man will be home soon.

John and Zed arrive at Cheryl and Tony's house just in time to meet Elder Martin. Martin forbids John from using any black magic but John goes ahead anyway, cooking up a divination spell to locate Gemma. As he does so, Cheryl explains that The Resurrection Crusade has been supporting them spiritually, while sales of their 'prayer pyramid' videos have supported them financially. John marks Gemma's location on a map, while Zed uses automatic drawing to render a picture of the house. The pair slip out of the back of Cheryl's, to avoid the police.

Gemma, still wearing her wedding dress, looks up as The Man enters the house. He asks if she will marry him and stay forever. She consents and, taking her by the hand, he leads her to the cellar. Meanwhile, John and Zed have finally found the house. As The Man begins his ceremony, pledging alliegance to a goat's head placed on an upturned cross, the pair break into the house. They find the bodies of the three young girls in the bed upstairs - all decaying - and with nowhere else to go, John runs to the cellar.

John makes it to the shrine just as The Man begins choking Gemma with a thin cord. The Man hits him in the head with a plate and prepares to murder him just as Zed arrives with a wine bottle. She beats him half to death before she's able to stop herself. Gemma, thankfully, is still alive. John lifts her carefully just as Zed notices scars on The Man's chest that read 'Damnation Army'.

John and Zed make it outside just as The Resurrection Crusade arrive. Zed disappears quickly, before they can see her, while John passes Gemma to her parents. Soon 'God's Warriors', the army's militant wing, have set the house on fire. Later that night, John and Zed check into a hotel. John notes that the woman is hiding something from him - and he can't wait to find out what...