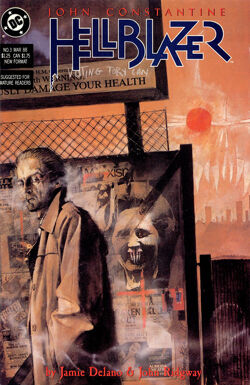 John Constantine: Hellblazer #3 (March 1988) is the first standalone Hellblazer issue. The story sees John dealing with soul-brokering demons in London, and is a satire of 'soulless' Thatcherite economics.

Roger Randall, one of many wannabe yuppies living in 1980s London, is bemoaning his run of bad luck while out jogging when two associates - Rod and Bella - jog up next to him. They say that he's fallen so badly behind that his backers, Mammon Investments, will have to activate a 'penalty clause'. Hooking their arms under his, they run him so fast that he has a heart attack and dies, cracking his head open on the pavement as he falls. Bella writes something in her Fileofax using Roger's blood and they jog on, leaving his body behind them, melted rubber cooling on his soles.

A few days later, on the eve of the British general eleciton, Constantine visits his friend Ray Monde, who keeps tabs on unusual things appearing in the newspapers. He tells John about the deaths of several yuppies, including Roger, in the run-down Spitalfields area of London. His interest piqued, John goes to investigate. He sees Rod and Bella entering a run-down house that they've made their home but doesn't see them transform into demons inside, nor hear their conversation about how they've been capturing souls for their infernal boss, Blathoxi, to boost the supernatural stock exchange.

Soon Bella and Rod leave the house with John in tow. He lays low until a drunk woman walks in and approaches Rod. She explains that she's had a run of bad luck and would like some more time to pay off what she owes, but he lays claim to her soul anyway and kills her. Realising what's going on, Constantine flees back to his flat. There he summons Blathoxi and is invited down to a meeting in Hell, where he offers up his soul to the demon.

Blathoxi is initially interested, commenting that the UK's soul market is rich pickings now that the Conservative party is in government and that as they are likely to win the upcoming election he's in a very strong position. However, John's eagerness to sell up makes him suspicious that the mage has some inside knowledge saying that the Conservative party will lose the election - which would crash the market and leave John with fortune, fame and his soul. It's all a con, of course, but Blathoxi is taken in and immediately pulls out of the UK market, while his minions toss John back into his apartment - which is now full of angry demon yuppies.

John awakes to find himself hanging upside down from the ceiling of his flat, with his TV showing the general election. As Conservative Prime Minister Margaret Thatcher gears up to win a third term, the demons start throwing John around like a piñata and prepare to drink his blood. But before they can cut him open, Blathoxi appears. Fuming about all the useless stock he holds, he drags his employees down to be tortured in Hell - but leaves John alive, knowing that he can't let on that Constantine bluffed him.

Instead, John is left hanging from the roof as Margaret Thatcher wins the election once more...