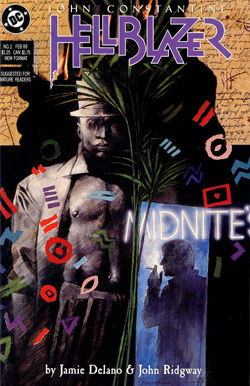 John Constantine: Hellblazer #2 (February 1988) concludes the first Hellblazer storyline. In it, John tackles the hunger spirit alongside his allies - and is forced to make a terrible decision.

The story sees John travelling from London to Africa and then the US to combat a hunger spirit that has been unleashed on New York City.

After narrowly escaping Mnemoth Constantine arrives at Papa Midnite's club. The voodoo priest takes him to see Gary Lester, locked up in cells beneath the building. Lester begs for more heroin, but Constantine explains that he needs to go cold turkey so that his desire will call Mnemoth to him, distracting it while John and Midnite move in for the kill.

Constantine heads up to Papa Midnite's hotel suites to sleep, but ghostly appearances by The Newcastle Crew - Sister Anne-Marie, Frank North, Benjamin Cox and Emma - keep him awake with a silent vigil. He furiously tells them that they knew the risks, that it's not his fault they were killed by the Invunche. He realises that they are there to make him feel guilty about his plans for Lester, but he's having none of it - he tells them to get out and turns off the light.

That night Mnemoth claims several more victims - a bodybuilder compelled to consume his own flesh being just one of them - before sensing Gary. As the hapless man is dragged to the roof of Midnite's tower, the spirit's swarm begins flying towards him. On the roof, Constantine is greeted by the sight of an electric chair that Midnight had shipped in from Sing-Sing prison, believing that the lives lost to it had granted it strong magic.

Lester is strapped in, with the promise of heroin if he co-operates, and Midnite begins the ritual. As Mnemoth approaches, Lester realises that it's now too big and powerful for the bottle - and that he is to be the new vessel. The flies swarm into every available hole in his body, filling him up with Mnemoth's spirit. Constantine manages to mark Lester with the same markings of containment that had been on the little boy the spirit was in before and it's all over. Lester, whimpering pathetically, is straitjacketed up and given a shot of heroin before being led back to Midnite's cells.

Constantine waits outside Lester's cell for hours, listening to his screams as Mnemoth devours him - and then itself - from the inside. When the deed is over, Midnite bricks up the cell and Constantine heads outside into the sunlight, noting that Lester has joined the silent ranks of his ghostly entourage.