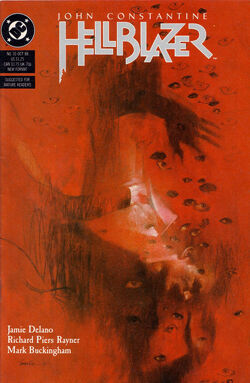 John Constantine pictures himself as a sperm, spewing forth toward some untold end. Eventually, he breaks free from this image, and realizes that he is in his astral form, having been displaced into the astral dimensions by the Swamp Thing's possession of his body. While Constantine had had the idea to offer his body up as a vessel with which to impregnate Abby Holland, the Swamp Thing came up with the same plot, but his distrust made him choose to bring it to fruition without John's consent.

Refocusing, John turns his attention to Glastonbury, where he had thwarted the Resurrection Crusade's plans to use his friend Zed to mother a heavenly race by having her copulate with an angel. She is meant to be pure, but she had consented to having intercourse with John recently, and because of the taint in his blood from the demon Nergal, he expects that her angelic suitor will reject her. He watches as events unfold as he expected, but he is surprised to see how wrathful the heavens are, as Zed is killed along with all of the other cultists.

Constantine watches as Nergal discovers that his plan has worked, and through Constantine, he has thwarted heaven. Nergal is ecstatic until he notices that something has just changed within The Green. When he discovers that the Swamp Thing is mating, he becomes enraged, knowing that Constantine has used Nergal's taint to fulfill the prophecy. He unleashes hell hounds on Constantine, who rushes to the only place he can think of that he would be safe: his own body.

John swims toward The Green, making his way to his own body again, and finally, he forces the Swamp Thing out of it. Unfortunately, his body is still in the process of making love to Abby. When he explains that the Swamp Thing is no longer in possession of his body, Abby is disgusted, and berates him, running off. John half-heartedly apologizes to the regrown Swamp Thing, but agrees to leave. Before he leaves, Swamp Thing sends him a message from Nergal: "Remember Newcastle."

Those words are unnerving to John, and as he returns to his flat in London, he realizes why. He opens the door to find that his friends Mighty Mouse and Mrs. McGuire have been brutally murdered. Angrily, Constantine realizes what the significance of Nergal's words were, and he digs through his records for a certain file...