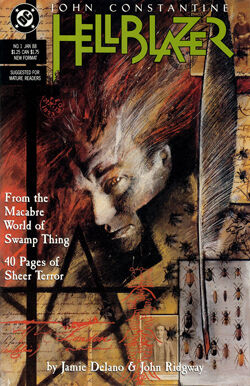 John Constantine: Hellblazer #1 (January 1988) sees the beginning of a two-part story that reintroduces Constantine and Emma, both first seen in Swamp Thing, and introduces several supporting Hellblazer characters. It makes explicit references to the events of Swamp Thing issue 37, in which Emma was killed.

The story sees John travelling from London to Africa and then the US to combat a hunger spirit that has been unleashed on New York City.

In Greenwich Village, New York, an obese man rampages through a restaurant, eating not just his own food but also that of the people next to him. But as he eats and eats, his body wastes away, becoming a skeleton clad in loose skin.

Meanwhile John Constantine has just arrived back in London after living in The Big Apple. There his landlady, Mrs. M, hands him a parcel and tells him that his 'druggy' friend, Gary Lester, is waiting for John in his flat. Steeling himself, he enters the bathroom to find Lester covered in thousands of insects.

After spraying the bugs away, John gets his cabbie friend Chas Chandler to procure some heroin for Lester. Chas helps Lester shoot up and watches as John puts the addict into a trance and demands to know his story.

Lester explains that while he was out in Tangier he came across a malnourished, tongueless child being thrown out of a sweatshop. Picking up the child, he saw that the boy's body was marked with ritual tattoos binding something supernatural inside him. Compelled by the creature, a spirit called Mnemoth that takes the form of a swarm of flies, Lester took the boy back to his room and exorcised the spirit from his body - a process that ripped the child apart.

Lester trapped the spirit in a bottle, but found himself compelled to release it. Barely resisting and realising that he needed help, Lester headed back to the UK to seek John's aid. But, of course, John was in New York - so he convinced Mrs. M to mail the package to New York while he waited for John's return. The bottle was broken in transit, freeing Mnemoth and leading to the death seen at the start of the issue.

John gets Lester to draw the tattoos and tells Chas to babysit while he heads to The British Museum, where The Professor, an anthropologist and occult dabbler, identifies the markings as Sudanese.

Constantine flies to Africa, where he meets a witch doctor who calls him 'The Laughing Magician' and says that he has been expecting him. As the witch doctor's power is tied to Sudan he cannot help Constantine directly, but instead allows him to see a vision of the binding process that was performed on a luckless child to save the entire village. The boy was left in a barren place so that the spirit would consume him and itself, but he was found and sold into slavery.

While news reports talk a 'crammer' - the name given to Mnemoth's victims - eating comic books to sate the spirit's hunger, John and Gary Lester approach voodoo crime lord Papa Midnite for help. Although Constantine cheated Midnite out of money previously, the voodoo man realises that they have a shared enemy and agrees to help.

John leaves Lester with Midnite and goes to the flat of Emma, his ex-girlfriend and a victim of a monster called The Invunche (as seen in Swamp Thing issue 37). There he meets her spirit, who offers to help him out with the problem. They head out and it's not long before they come across Mnemoth's latest victim - a vegetarian who's hungrily devouring meat from a butcher's shop window. He dies and John and Emma follow a trail of insects from his body to a church, where John confronts the creature. But it's now far too powerful for him to contend with and he flees as it consumes the local priest.