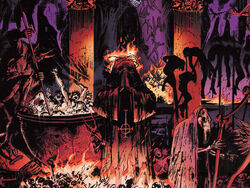 Hell is the lowest point in the afterlife, a place of despair, pain and terror where the souls of the damned go to be tortured for eternity. Exactly what form that torture takes depends on the individual expectations and beliefs of the soul involved. "Hell" is generally shown in Hellblazer to be the Judeo-Christian model, with other religions getting their own separate afterlives.

A quirk of the universe that Hellblazer inhabits is that souls generally do not go to Hell because of the judgement of a god, but because that is where they themselves believe that they should go. Their own guilt weighs them down, and theoretically they can pass on to Heaven if they feel that they have worked off their guilt. However, souls may also taken to Hell after being sold (by the owner) to a demon, or if directed by a psychopomp such as Lucifer. It is also possible to convince an innocent that they are supposed to be in Hell, at which point they will remain there.

However, this doesn't necessarily mean that any sinners can go to Hell as long as they believe they are belong there. In cases such as in Hellblazer issue 230, a person can still be dragged into Hell if his/her sins are too heavy, regardless whether they think they should be in Heaven or not.

Although Hell is a metaphysical construct it is possible for a living human to enter and interact with it while remaining within their physical bodies - although it may be somewhat more difficult for them to leave if the inhabitants find out. Souls that leave Hell and escape to the real world can appear as anything from insubstantial ghosts to corporeal beings.

Hell's topography includes mountains, plains, forests, volcanoes, lakes and other features, though usually with a grim twist: a lake of fire, a forest of suicides etc. Within this vast landscape some of the more powerful demons have built themselves kingdoms complete with castles, villages, servants etc. As explained in the comic book Lucifer, the appearance of these settlements is decided by the whims of the owners, which is why some reflect bygone eras of human history.

Every people sent to Hell view the place differently; with each one having their "own" Hell. In the book Hellblazer/The Books of Magic, John Constantine invites Tim Hunter to his own version of Hell, which Tim sees as vastly different and more dangerous from the fluffy monster Hell that Tim visited in his "Reckonings" storyline.

As you may expect, Hell is filled not only with human souls but also with demons of varying degrees of power. It is the demons' role to inflict torture upon the souls, which they do with varying degrees of enthusiasm. There is a definite, though elaborate, hierarchy within demon culture that sees some acting like royalty and rulers and others like mere peasants - usually based on power and cunning.

Most demons began as human souls themselves; those that proved nasty, brutal or cunning enough might then be 'elevated' to demon status. However, demons are also capable of breeding and thus some demons may be natural-born.

While the demons' primary role is to torture the souls of the damned, not all of them bother to do this. Whether this is because they have been given special dispensation or whether torturing souls is optional has not been made clear and may differ from region to region. Hell has also been shown to have its own entertainment, ranging from dancers to television shows such as the one seen in Dark Entries. This entertainment may involve torturing souls but some of it, at least, is for the demons' own amusement.

Time in Hell is fluid; 15 minutes of objective time on Earth can seem like 15,000 years of torment to a soul in Hell. However, a living being passing into Hell for 15 minutes and leaving again will appear - on both sides of the portal - to have spent just a quarter of an hour down there.

As a result, a soul may spend 10,000 years in Hell training to be a demon while only a few years have passed in objective Earth time.

Might is right in Hell, which means that a powerful or cunning demon will be able to rise to the top of the social ladder, perhaps getting his or her own land and subjects in the process. As a result Hell is an extremely treacherous place, with assassinations, coups and double-crossings being a fact of life for those at the top (although it is extraordinarily hard to kill a demon, it is possible to render them incapable of doing anything for thousands of Hell years by, for example, shredding them and scattering the pieces).

Hell was originally ruled by a triumvirate composed of the First, Second and Third of the Fallen - the first three creatures to arrive in Hell. However, this was deposed at some point in the 20th century by a new triumvirate consisting of Lucifer (The Fourth of the Fallen), Beelzebub and Azazel.

After Lucifer - the most powerful of the beings in Hell by far - left to live on Earth, control was passed to two angels. However, the original triumvirate ousted the angels and returned itself to an unofficial position of power beneath them. With the deaths of the Second and Third of the Fallen, The First of the Fallen now remains its sole demonic ruler.

The beginning of time: The First of the Fallen is created when God removes his conscience and gives it physical form. He then becomes the snake in the garden of Eden and is cast down to a non-place. The Second and Third of the Fallen are created as equally powered adversaries to occupy him. Ages pass, and Lucifer loses his rebellion against God and is cast down to the same non-place. (Hellblazer issue 83, 1994, and Hellblazer issue 59, 1992)

Aeons later: Human souls, dying and looking for punishment, begin to accrue in the non-place; their expectations form Hell as we know it. Lucifer remains aloof while the First, Second and Third of the Fallen set up a ruling triumvirate.

The 20th Century: For reasons unknown the triumvirate is ousted by a new one comprised of Lucifer, Beelzebub and Azazel. (The Sandman issue four, 1989)

1990: Lucifer, realising that running Hell is just acquiescing to God's plan, kicks out all the souls, locks it up and turns the key over to Morpheus, The Sandman. Morpheus eventually gives the key to the Judeo-Christian God, who then sends two angels, Remiel and Duma, to run it. Immediately thereafter the original triumvirate reform and take unofficial control. (The Sandman issue 21-28, 1990-1991; Hellblazer issue 59, 1992)

1993: The First of the Fallen discovers a way to destroy the Second and Third and becomes the sole ruler of Hell. (Hellblazer issue 79, 1993)