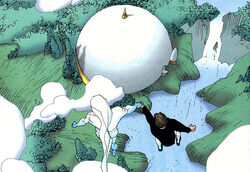 Heaven is a paradise where souls go to exist in a state of everlasting peace and happiness. The form that this happiness takes depends on the beliefs and desires of the soul in question. The Heaven featured in Hellblazer is specifically that of the Jewish/Christian God; other religions have their own afterlives.

Hellblazer exists in the same universe as Swamp Thing, The Sandman and many other comics. In this universe, souls generally do not go to Heaven because of the judgement of a god, but because that is where they themselves believe that they should go.

While it is possible for a living human to enter and exit Hell, no such thing has been shown regarding Heaven, although Swamp Thing was able to enter it after temporarily shedding his body and a still-living Samuel Taylor Coleridge was shown a vision of Heaven in Hellblazer issue 105. It is also possible for souls to leave Heaven if they so wish; Brendan Finn has done this twice - once to go drinking with John and a second time to attend John's wedding.

As paradise can be an entirely personal experience, Heaven does not necessarily appear the same to everyone - although in Swamp Thing an area of Heaven was shown where souls could interact. Generally, Heaven is portrayed as containing lush, verdant fields, rolling hills, clear lakes and general pastoral loveliness.

One static part of Heaven is The Silver City, a floating series of towers where the angels live. In this shining metropolis is The Tower of Unendingly High, which contains a room known as the Logos. This contains every word that God has ever said, whirling endlessly around the room in a cacophonous noise that would drive a mortal insane.

In the comic book Lucifer, The Silver City was brought crashing to the ground during a major attack by Hell's forces. However paradise itself was apparently unharmed.

As well as the souls of the dead, Heaven is the home of the angels. These warriors and scribes do not interact with the deceased, instead staying within the walls of The Silver City to best serve their master.