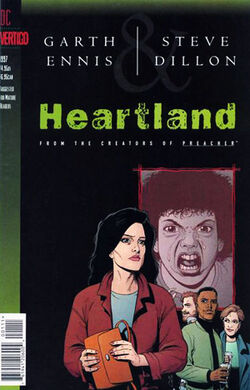 Heartland (January 1997) is a one-shot special featuring Kit Ryan, an important supporting character in Garth Ennis's Hellblazer run, and is set in Belfast approximately three years after Ennis's run finished. Although it features Kit and other characters that first appeared in Hellblazer, no references are made to John Constantine or the supernatural events of that series.

The issue opens on Willy and Corno, two friends sitting on a pile of rubble in a Belfast street. They chat for a while before noting Neil, a scrawny young man who pines after a beautiful woman who lives up the street. Neil walks on to the woman's house - she turns out to be Kit Ryan, John Constantine's ex-girlfriend. Neil watches through her window (it is implied that he is masturbating at the same time) when three men with covered faces approach him from behind. They accuse him of being a drug dealer and, as he is unable to explain what he's doing, they drag him away to a field just outside town, push him down onto the ground and shoot him. Before they do so, they reveal themselves to be members of the UFF, a pro-British group.

The following morning Kit comes downstairs to find her sister Claire (with whom she shares the house) in the kitchen and Claire's twin brother Peter on the couch, nursing a hangover. Over breakfast, Peter - who, it turns out, has been having it away with a married woman - tells Kathy that Neil was kneecapped the previous night and is now in hospital. Kathy, remembering him as the guy she's turned down a hundred times, heads off to visit him - though Claire warns her that it might give Neil the wrong impression. Before Kit leaves, Claire reminds her that their sister Ann and her husband Seanwill be around later - and so will their youngest sister Bernadette and her boyfriend Rodney.

Neil, of course, is delighted to see Kathy walk in. He turns out to be surprisingly chipper - mostly because the UFF boys had such bad aim that they only blew off one of his kneecaps - the other was just grazed. Kit, unamused, tells Neil that she knows why he was around her house yet again. She tells him that if she sees him around there again she'll call the police and have him arrested for harassment.

Back home, Kit pauses when she sees Sean's car parked outside. She flashes back briefly to her father looking furious, her mother looking horrified and a young Peter doubled up in pain. Inside she meets Bernadette's boyfriend, Rodney, before finding everyone else in the living room. Once more she flashes back - this time seeing a young Bernadette with tears streaming down her face. The pair act coolly around each other.

As Sean boasts about his fancy car, Kit heads into the kitchen to chat with Claire and reveals that Bernadette's presence is making her nervous. It's clear that the two have bad blood between them. Peter joins them and Claire says that Ann and Sean are planning to take Bernadette to visit their Aunt Marie for the weekend. But Aunt Marie's a racist and Rodney is black, so Claire wants Rodney to stay with them for the weekend.

Kit's quick to blame her sister for being ashamed of her boyfriend, but level-headed Claire assures her that it's Ann's idea and Rodney's completely happy with it. Peter says he'll be happy to take Rodney out for a drink - to absolutely no surprise from Claire and Kit. Sure enough, Sean, Ann and Bernadette drive off and the rest of them head for a drink, gently mocking Sean's nouveau-riche lifestyle. Claire apologises for their aunt's bigotry but Rodney says he's happy - he figured if it was a choice between battling a racist in the middle of nowhere and going for a drink with them, he'd choose the latter.

In the pub, Kit says that Rodney seems a bit fazed. He explains that on the way there a truck full of armed British soldiers drove past and the rest of them acted like nothing was amiss. Kit says they've been there for 25 years - long enough to just become a regular part of the traffic. Peter joins in with a story:

He used to work in Shorts, he explains; it's a company that makes aeroplanes. One day he was on the toilet listening to Bob Marley ultra-loud on his Walkman when the toilet door, the lock broken, slowly swung open. He looked out of the cubicle and through the open door to the toilets to see a robot trundling through the factory. Quickly pulling his trousers up, he followed it to a table, where the robot began to fiddle around with his sandwiches. Only while talking to the robot did it occur to him to wonder where his colleagues were, and why two heavily-armoured men were running towards him. It turned out, of course, that someone had phoned in a bomb hoax and that his music was so loud he hadn't heard the alarm.

Later that night the group walk into a takeaway shop, where Rodney boggles at the sight of a gun-toting soldier flirting with the girl behind the counter. Kit again remarks that it's something you get used to - just part of the background... until it isn't.

Back home, Kit sleeps on Claire's bedroom floor to give Rodney somewhere to stay the night (Peter having collapsed on the couch). That night Kit remembers a moment from 1978. In the memory she's just broken up a fight between the 13-year-old Peter and Claire, telling them not to upset their mother, Concepta, who's downstairs entertaining Bernadette. Peter and Claire know that their dad will most likely come home drunk and violent, and Ann - the eldest - won't be around to calm him down. Bernadette, the youngest, is oblivious to this, however: she's clearly daddy's girl.

And just then daddy comes home. Paul Ryan, reeling drunk, picks up a delighted Bernadette and swings her happily around the living room. But Concepta, worried that he'll drop her, tells him to stop. He sends Bernadette off to bed and immediately starts arguing with his wife as Kit listens in from the stairs. Paul moans that she's always nagging him - that she wouldn't even let him give the children Catholic names to fit their heritage. Concepta tells him that 'heritage' is what's getting people killed every day and they'd be better off without it. Paul, furious, screams that if he ever heards her saying something like that again he'll kill her, then storms off to bed.

Kit comes downstairs and asks why her mother doesn't leave him. Concepta says that she needs to be there to make sure that Peter, Claire and Bernadette grow up safely and properly, then begs Kit never to marry a man like Paul.

Back in the present day, Kit - now weeping - says to Claire that their mother was a wonderful woman.

The following day Kit and Rodney are out and about when they happen across Neil, now on crutches. Kit makes her excuses and they move on. when she tells Rodney that Neil's the only man in Belfast who's interested in her, he begins to flirt a little bit. Later, they sit down and Kit explains how she sees the Belfast situation: a lot of justifiably angry young men doing unjustifiable things to one another.

Back at the house Kit asks why Rodney goes out with Bernadette; he says he likes how determined she is, and how she has a vision of what she wants her future to be. He does, however, admit that she's pretty childish. He says he'd prefer someone like her but older and more mature. They put down their drinks and pretty soon they're kissing - just in time for everyone - including Bernadette - to walk in the door. Rodney exits sharpish alongside Sean and Peter. Kit meets her sister's eyes and flashes back once more.

It's 1978 again and the family - minus Paul, who's out drinking, and Bernadette, who's asleep - are in the living room of Concepta's house. Paul reels in drunk and angry, and goes to make himself a cup of tea. But Concepta's left the lid off the pot, so when he picks it up it splashes all over his crotch. Concepta laughs, saying that he's pissed himself, and he immediately races in and headbutts her. Concepta drops to the floor and Peter - still only 13 at the time - steps in, only to get a fist in the solar plexus. As he doubles up, Paul begins kicking Concepta in her ribs, calling her a whore.

Just then Kit jumps up from behind him and jabs a breadknife into his cheek. He falls to the floor himself and looks on confused as she screams her hatred at him, telling him that he's scum, that he deserves to die and that she wishes she'd stuck the knife in his heart. Just then Bernadette runs into the room and, seeing only her daddy with a cut cheek, immediately turns on Kit.

Back in the present day, the sisters are fighting once more. Bernadette asks if Kit's determined to ruin her life, first by driving her father to his death and then by stealing her boyfriend. Claire interjects, saying he drank himself to death, while Ann tries to play peacemaker. Bernadette shouts at Kit, saying she tore their family apart and turned everyone against Paul, and that Kit hates her because she was the only one who wouldn't turn on Paul like Kit wanted them to. Then she spits in Kit's face.

This time it's Kit's turn to shout. She tells Bernadette how hateful their father was, how Concepta feared for her life, how he was out drinking the night she died, and how one night Paul came into the house shitfaced, held Concepta down and raped her - and the result was Bernadette, 'His special wee girl'.

Bernadette runs out crying and Ann asks if it's true about the rape, to which Kit admits that it actually isn't. Bernadette runs past Rodney, Seth and Peter, and Rodney gives chase. Seth asks if the war's over and Ann snaps that he should just 'fuck off back to whatever wee whore you're with at the minute'.

That night Claire and Kit are walking through Belfast. Claire says she hasn't heard from Ann, but guesses that her sister is busy making Sean's life a misery. She adds that she had no idea Sean was sleeping around and Kit agrees. She asks Kit why she said what she said, and Kit just says that she was angry and wanted to do some damage. Before they can get too maudlin, Peter calls over to the pair and drags them off.

The trio walk past Willy and Corno, who continue their conversation from before. Corno gets a little maudlin, saying that he was a terrible husband to his wife, and Willy - who turns out to be his son - tells him not to be so daft, and tells him that he'll see him tomorrow. As Willy walks off into the night, his dad looks up at the stars and sings a sad old song of Belfast.

Retrieved from "https://hellblazer.fandom.com/wiki/Heartland?oldid=7180"
Community content is available under CC-BY-SA unless otherwise noted.