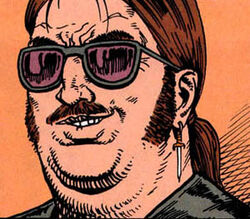 Header is a Scottish biker and an ally of John Constantine. He is best friends with Rick the Vic. His first appearance was in Hellblazer issue 63.

Header is, in many respects, a stereotypical Glaswegian: he's loud, aggressive, prone to violence and drinks heavily. However, he's also fearsomely loyal towards his friends - including Rick the Vic, whose attitude is very much the opposite of Header's - and a loving father to his (conjoined) twin daughters.

When he first appears, Header is shown to be overweight, with red hair, sunglasses and what may be a biker's jacket, although he is never shown riding a bike. Flashbacks show that his obesity developed in the late 80s to mid-90s after he left the army.

In the early 80s Header was a member of the British army and saw combat in the 1982 Falklands War between Great Britain and Argentina. At one point his unit captured four American mercenaries fighting for the Argentinians. Orders came through to execute them and Header ended up being the trigger man - an action that haunted him to his dying moments. (Hellblazer issue 78, 1994)

Header was sprung from active duty in the war by his friend John Constantine, who needed his help binding a demon to get crime boss Harry Cooper off his back. John, Rick the Vic and Brendan Finn summoned the demon; Header knocked it off its feet with a shotgun blast and held it down while they bound it. (Hellblazer issue 130, 1998)

In 1983 Constantine was hired by Jerry O'Flynn to procure The Ace of Winchesters. Header was in attendance at the meeting, though his attention was mostly taken up by a Scotland-versus-England football match on the TV. Scotland conceded a goal, much to Header's annoyance and Rick the Vic's amusement. (Hellblazer issue 76, 1994)

The following year John was mistakenly believed dead after a botched exorcism. Header was one of several characters to turn up to the funeral. (Hellblazer issue 77, 1994)

In 1993 Header found his daughters in bed with Terry Butcher; infuriated, Header murdered Butcher and dumped his body in the river Clyde. This suggests that the event took place in Header's home city of Glasgow. (Hellblazer issue 63, 1993)

With The First of the Fallen bearing down on him, Constantine infiltrated The Caligula Club to steal pages from a rare occult book. Header went along as protection, but things turned nasty and Header tried to shoot his way out. He took a gunshot to the chest and died of his injuries in a bus stop some time later. (Hellblazer issue 78, 1998)

Header was one of several dead characters to appear in a ghostly pub, 'The Elephant's Graveyard', in the Hellblazer 10th anniversary issue. (Hellblazer issue 120, 1997)

Retrieved from "https://hellblazer.fandom.com/wiki/Header?oldid=10110"
Community content is available under CC-BY-SA unless otherwise noted.