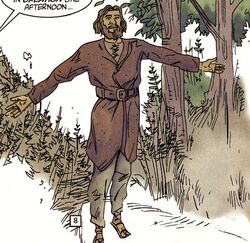 Mentioned many times, Yahweh, aka God (known in the DC Universe as the Presence), is, in Christian theology, the creator of both Heaven and Earth.

Although he is regarded as being the originator of everything, in the universe of comics that includes Swamp Thing, Hellblazer and Lucifer, it is rather more complicated. In these comics, gods themselves - including, presumably, Yahweh - spring from the imagination of humans and are given form and power due to belief. The more power they have, the more powerful and 'real' they become, and the more their belief system shapes the world. Thus, all creation myths are true - it's just that from time to time some are more true than others. As Hellblazer primarily concerns itself with Judeo-Christian mythology, Yahweh is generally portrayed and regarded as being the de facto creator and ruler of the universe.

John occasionally harbors a deep hatred for him, but is willing to help out if needed. In Hellblazer issue 127, John met a shepherd, during a campfire in the woods, which would turn out be a representative of God named Tom (God was known as "The Creator" during the issue).

A disheartened John whines about the state of the world and God's unwillingness to make it all better. Countering John's bitterness, the Shepherd questions the wisdom of allowing the whole world the same insights which John has gained. Begrudgingly, Constantine accepts these point as the various factions of Hell who allied against him get exactly the good reward they deserve. John later manages to use a confidence trick, and bluffs God that he had sold his soul to the devil, and warns him of his inevitable rise through Hell if ever his soul is damned there. God relented, and sent a light from Heaven unto John Constantine to give him divin protection from his enemies.

There has been some considerable debate of who might have been the character who appeared with John in the campfire. Most assume that it may have been Jesus Christ, but in the comics he was somewhat referred to as the "Creator". The Hellblazer website confirmed that God nonetheless was the one from Heaven who  saved his soul from the First.[1]