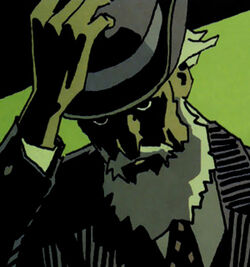 Ghant is a magician and one of John Constantine's most formidable human opponents. His first appearance was in Hellblazer issue 178.

Ghant is a wiry, weathered-looking mage with a bushy white beard and elegant sartorial tastes, usually being seen in a pinstripe suit/bowler hat combo. He's also a complete sociopath with little regard for manners, friendship or compassion. Ghant's sole interest is in completing his 'bone abacus', a collection of bones from various people and creatures that, when placed on a special board, can be used to commune with the souls of the bones' previous owners and cast powerful spells.

Ghant's obsession with the bone abacus began in 1983 when he, John Constantine and a policeman named Roger Bentham investigated a series of killings near Gruinard Island, off Scotland. They were the work of a succubus that had become pregnant by a vampire; it was feeding off the life essences of men to sustain the children in its womb. After it gave birth, the rapidly-growing children devoured it. To ensure that no-one else came to harm, John and Ghant cast a binding spell on them: a sheep's skull was buried on the island and a bit of bone taken from it - so long as the bones never touched the same soil again the children would not leave the island. Ghant used that bit of bone to begin his abacus. (Hellblazer issue 187-188, 2003)

Over the following decades Ghant tracked down other bones for his abacus, using it to identify and locate the next required piece. He also did some work for other magicians, including torturing the ghost of Scrape Gillis for Domine Fredericks and Joshua Wright. By this point it was so powerful that Ghant was capable of sending Scrape's soul to Hell and bringing it back again with little effort. (Hellblazer issue 178, 2003)

Eventually Ghant discovered that the final piece of the abacus was a bone from the succubus buried on Gruinard. He returned there with both John's niece Gemma and Bentham, reversing Gemma's age so that the starving children on the island wouldn't eat her (they only ate adults). However, Gemma was able to knock the first bone piece onto the ground, releasing the children and destroying the abacus. The children killed Bentham and went for Ghant, who was only able to escape by diving into the cold Scottish water. (Hellblazer issue 187-188, 2003)

Gemma hadn't just destroyed the abacus, however, she had seriously unbalanced the souls it channelled, all of which were pulled into Ghant's flesh. They emerged as mouths on his body - mouths that could read the future and hungered for flesh. (Hellblazer issue 198, 2004)

In the wake of a near-apocalypse triggered by John, Ghant was able to set himself up as a cult leader in London, using the mouths as oracles and feeding on followers collected from the homeless population. By chance, Constantine - then suffering amnesia - ended up entering the church, where Ghant had him tied up and auctioned his soul off to Hell's best and brightest. However The First of the Fallen crashed the party and, irritated at not being invited - and then infuriated when he believed that the amnesiac Constantine was an impostor - dragged Ghant to Hell. (Hellblazer issue 197-199, 2004)