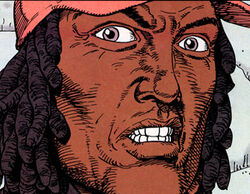 George Ridley is a friend of John Constantine. His first appearance was in Hellblazer issue 64.

When he first appears, George is a young black Briton in his 20s with medium-length dreadlocks; in later appearances he is shaven-headed. George is a smart young man but years of encountering racial abuse have left him with a short temper and a proclivity for violence, unlike his mellower older brother Dez. He has killed racists in both rage and cold blood, and seems to feel little remorse. George is a prominent anti-fascist campaigner and attends rallies and demonstrations - something that makes him a target for bent coppers.

Although he grew up in London, George lived in Birmingham from 1989-1993. However, at the end of that period his house had become a target for racist attacks. During the first a man accidentally set himself on fire after trying to make a Ku Klux Klan-style burning cross on his front lawn. George let him burn to death. A couple of weeks later a petrol bomb went through his house window and burned it down. (Hellblazer issue 64, 1993)

George moved back to London. While drinking with his brother Dez, the pair came across John and Rick the Vic in a pub. Dez hadn't seen John for ages and afterwards the pair went for a walk. Unfortunately John had been targeted by Charlie Patterson, a British nationalist, and the pair were quickly kidnapped by Patterson's goons. Dez fared the worst by a long shot, being beaten and slashed by the thugs and eventually dying of a crushed larynx. (Hellblazer issue 64-65, 1993)

Worried about his brother, George picked up a shotgun off a dodgy friend of his and started looking for him. Eventually he found Micky, one of Patterson's thugs, boasting that his friends had captured Constantine and Dez. George got their location from Micky before kneecapping him. After arriving at the warehouse where they were being kept, he saw Patterson's men loading Dez's body into the boot of a car. Infuriated, he charged into the room and shot Patterson dead. (Hellblazer issue 65-Hellblazer issue 66, 1993)

George and John had parted on bad terms and did not see each other for a year. During that time, George - who was living at home with his mother - went on an anti-fascist march, during which the police took pictures of him and other protesters. Sure enough, Detective Constable Kenfield and Detective Constable Shaw turned up at his mother's house one day and, after talking their way past her, arrested George on a trumped-up drugs charge. Mrs Ridley tried to intervene, but the callous and racist Shaw shoved her down the stairs, where she broke her neck. Enraged, George grabbed a shotgun and killed Shaw before fleeing. (Hellblazer issue 78, 1994)

George fled to an estate in Tower Hamlets where several of his friends, including Zap, lived. His friends agreed that they would hide him and that the police - whose institutional racism had made enemies of many of London's black communities - wouldn't be able to take him without kicking off a riot. George offered to leave but it soon became clear that many of them were itching for a fight - and that they'd found in him the perfect excuse. Later, as George was picking up a stash of spare shotgun shells, John tried to intervene and get him to cool off, but George refused to listen. (Hellblazer issue 79-80, 1994)

Sure enough lines were drawn across the entrance to the estate, leading to a tense showdown between the police and the residents, led by George's friend Will. He refused to allow the police to pass, so the commanding officer told his men to open fire with plastic bullets. The first shot, fired by a nervous copper, accidentally broke Will's neck, kicking off a full-on riot. Zap was able to talk some sense into George and drag him out of harm's way. The pair decided to flee across a fenced-off train track and George passed his shotgun to Zap while he kicked a hole in the fencing. Unfortunately the police chose that moment to turn up and promptly killed Zap in cold blood. George, horrified, ran on. (Hellblazer issue 80-81, 1994)

John and George met one last time, shortly after the riots had died out. George, grieving for his friends, asked John for a little advice, but all John could say was to hold onto his guilt and try to make something decent come out of it. The pair parted ways and George left for a life on the run. His current whereabouts are unknown. (Hellblazer issue 83, 1994)