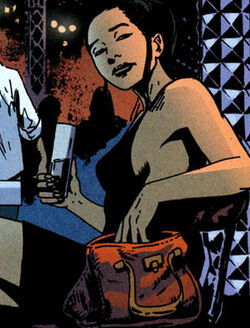 Gemma Masters (b. 1979) is John Constantine's niece and a sometime mage. Her first appearance was in Hellblazer issue four.

In her first appearance Gemma was only eight years old, with black hair and a scrawny body. Her subsequent appearances in the comic have seen her growing into a mature adult. As of Hellblazer issue 274 she has apparently started dyeing her hair, which now looks light brown.

Gemma was initially portrayed as a smart and capable - if slightly naive - girl who idolised her uncle. Indeed, despite stern words from both him and his then-girlfriend Kit Ryan, Gemma spent her teenage years trying to follow in his footsteps by learning the magical arts. Although she proved to be capable, her desire to impress her uncle got her into a couple of scrapes, including being held hostage (without her knowledge) by gangster Domine Fredericks. She subsequently grew into a more assertive and canny person, tricking a date-rapist in Hellblazer issue 205 and helping out her uncle on more than one occasion.

However, after falling in love with Chris Cole and seeing him die due to his connection with the empathy virus and losing both her parents to demonic forces, Gemma was shaken enough to divorce herself from magic altogether. In Hellblazer issue 275 it was revealed that she had been seeing a therapist to keep herself on the straight and narrow. When holding back from magic, Gemma is seemingly more vulnerable and less sure about her place in the world.

Gemma was born in 1979; shortly thereafter her mother, Cheryl, fell out with her father, Tony, and took her to London. There Cheryl planned to stay at John's house, but instead he put some money in her pocket and turned them away. (Hellblazer issue 274, 2011)

Three years later, Gemma and her mother were unwittingly made into targets by gangland boss Harry Cooper, who threatened to kill them unless John resurrected his son. Fearing for their lives, John agreed. (Hellblazer issue 130, 1998)

In the late 80s, Cheryl and Tony joined The Resurrection Crusade, a Christian cult that used pyramid selling to raise both money and its profile, with the eventual aim of bringing back Jesus Christ. Gemma, unaware of this, only knew that her parents had banned television, magazines and all the things she enjoyed. One night in 1988 she met three eerie girls who put her into a trance and took her away to be married to 'The Man', a Satan-worshipping paedophile and member of The Damnation Army. He intended to murder Gemma and add her ghost to his harem, but John and his then-partner Zed were able to intervene. (Hellblazer issue four, 1988)

1990: Gemma's grandfather, Thomas Constantine, was murdered by The Family Man and shortly afterwards she began to have visions of him sitting on the end of her bed. Tony and Cheryl were worried that Thomas might have abused her but it turned out that she actually was being haunted by her grandfather. John was able to step in and lay his father's ghost to rest. (Hellblazer issue 31, 1990)

As Gemma grew older she became fascinated by her uncle, seeing only his glamorous and mystical lifestyle and not the tragedy that went with it. In 1993 she made friends with Robbie Brooks, an older boy who taught her some basic magical techniques. John, unamused, put a pretend curse on Robbie to make sure that he would stay away from her. Meanwhile John's then-girlfriend, Kit Ryan, did her best to talk Gemma out of dabbling in magic. (Hellblazer issue 62, 1993)

John didn't see Gemma again for five years, and then only briefly: she told him that her family had been having visions of her grandfather in Hell. John tried to explain that Thomas had put himself there and that the visions were being sent out by his enemies to ruin his life, but Gemma ran off before he could get the words out, telling him to stay away. (Hellblazer issue 126, 1998)

During the following four years, and with her uncle in the USA, Gemma returned to the life of magic she had once renounced. She was tricked into joining up with gangster-mage Domine Fredericks in order to ensure that John would play his game. Gemma refused to believe that she was being played by Domnine until it was too late and John was forced to rescue her. (Hellblazer issue 177-180, 2002)

Later, Gemma - along with Swamp Thing, Angie Spatchcock and Chas Chandler - helped her uncle battle The Beast, a creature that planned to wipe out the entire human race. Gemma used vivimancy, the control of living spirits, to commune with her then-unconscious uncle and, subsequently, to set up a trap for the monster. (Hellblazer issue 191-193, 2004)

In the time that followed, John sired three children - Adam, Saul and Maria - with a demon named Rosacarnis. The children then went out with the aim of killing all of Constantine's friends and family. Saul hypnotised Gemma's then-boyfriend, Simon, to drug her drink with the intention of raping and murdering her. However, Gemma caught him out and switched the drinks, knocking Simon out. She then smashed his kneecaps with a hammer. (Hellblazer issue 205, 2005)

Immediately afterwards, Gemma discovered that her father, Tony, had also been driven insane by Saul and had murdered her mother. Gemma and Angie opened up a portal to Hell that John entered to get his sister's soul back. While he was down there, Tony killed himself, condemning his own soul to Hell. Gemma was helpless to stop her mother from voluntarily staying in Hell to take half of Tony's punishment. (Hellblazer issue 205-212, 2005)

Gemma refused to talk to her uncle for a long time after that until she discovered that he was mixed up in the empathy virus, a spell that was causing mass suicides in Glasgow and threatened to spill out into the rest of the world. Along with Angie and Chas, Gemma helped John tackle the problem. Along the way she grew close to Chris Cole, a victim of the virus. Chris was eventually consumed by the virus, leaving Gemma in tears. (Hellblazer issue 224-228, 2006-2007)

Scarred by these events, Gemma once more drew a line between herself and John, and began attending counselling sessions in a bid to rid herself of magic altogether. Vulnerable and unsure of herself, she still attended John's wedding to Epiphany Greaves. But there disaster struck: The Demon Constantine, disguising himself as John, raped Gemma. She was left so emotionally damaged that she declared she would have vengeance on her uncle. (Hellblazer issue 275, 2011)

Gemma then contacted three female magicians whom she'd been taught the ways of magic by, asking them to summon a demon to make her uncle suffer - something they agreed to. (Hellblazer issue 277, 2011)

Gemma was present during John's funeral in Death and Cigarettes, and was the one to finally say goodbye to John Constantine as he left.