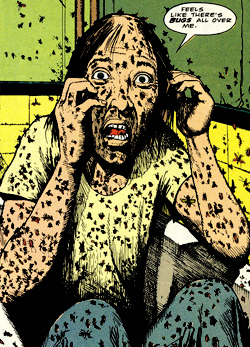 Gary Lester is a former friend of John Constantine and was first introduced in Hellblazer issue 1. Although he died early on in the series, he has continued to appear both as a ghost and in flashbacks, and has become symbolic of the sacrifices Constantine's friends make.

Some time in the mid-70s, before he got mixed up in the occult, Gary Lester attended art school. But despite his considerable talent he found it hard to maintain his interest and dropped out. (Hellblazer issue one, 1988)

In 1977 he and John Constantine formed punk band Mucous Membrane with drummer Beano, roadie Chas Chandler and assorted other members. They made their debut performance in Newcastle's Casanova Club. (Hellblazer issue 11, 1988)

Mucous Membrane worked the punk circuit for a while, eventually managing to fund a music video for their song 'Venus of the Hardsell' before they split up. (Hellblazer Annual one, 1989) They were going well into 1978. Hellblazer issue 162.

After a later gig at The Casanova club, its owner, Mr Logue, refused to give them money for the gig. The next day Constantine and Lester returned with some friends, a rag-tag group of occultists who would later be known as The Newcastle Crew. They found that Logue's abuse of his psychic daughter, Astra, had led to her summoning a monster known as Norfulthing. Constantine summoned the demon Nergal to defeat it, but as he did not know Nergal's name he could not control him. Nergal badly injured some of the crew - not including Lester - and dragged Astra to Hell. Constantine had a breakdown and spent two years in and out of Ravenscar Secure Facility. (Hellblazer issue 11, 1988)

Lester's movements between then and the 1980s are largely unknown, although he did develop a heroin habit at some point. In 1988 he spent some time in Tangier, where he found a young African boy with a hunger spirit trapped in him. Lester released the spirit and bound it in a bottle. Fearing that it might escape he sent it to John, who was then living in New York. The bottle was damaged in transit, released the spirit, which began to prey on the city's inhabitants. Eventually John was able to trap the demon inside Lester's body; it devoured him and, in turn, itself. Lester then joined the group of spirits haunting John throughout the 1980s. (Hellblazer issues one and two, 1988)

Some 15 years later, Lester's spirit clawed its way out of Hell, into the body of a suicide victim and began demanding to see Constantine. DCI Watford found out and Constantine summoned. Gary was able to pass on a warning about a posse of Lukhavim demons headed Constantine's way before he was dragged back into the pit. (Hellblazer issue 181, 2003)

In 2005, during John's voyage to Hell to save his sister's soul, Gary Lester was shown to be in the employ of The Demon Constantine; it was he who had sent Gary out as a warning earlier. (Hellblazer issue 208, 2005)

In 2015's Constantine: The Hellblazer, Gary appears a ghost who continues to accompany Constantine. He is aware of a demon that is killing ghosts, ending their afterlife. He later succumbs to the beast himself, once again being a victim of Constantine's schemes.

Gary Lester is the center point of episode 4 "A Feast of Friends".  Gary is played by Jonjo O'Neill and this marks the first time that Gary Lester appears in live action form.

Retrieved from "https://hellblazer.fandom.com/wiki/Gary_Lester?oldid=11091"
Community content is available under CC-BY-SA unless otherwise noted.