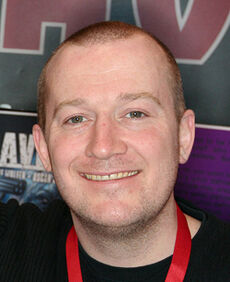 Garth Ennis (born 16 January 1970) is a Northern Irish comic author best known for the Vertigo series Preacher, created with artist Steve Dillon, and his successful nine-year run on Marvel Comics' Punisher franchise. He was the second writer to take a long-term stint on Hellblazer, writing issues 41-50 and 52-83.

Ennis began his comic-writing career in 1989 with the series 'Troubled Souls' in the British political anthology comic Crisis. It told the story of an apolitical man caught in the Irish troubles. The sequel, 'For a Few Troubles More', was a broad comedy featuring two supporting characters from 'Troubled Souls', Dougie and Ivor, who would later get their own American comics series, Dicks.

Another series for Crisis was 'True Faith', a religious satire inspired by his schooldays that was met with religious protests when released in 1990 and was later re-released in 1997 by Vertigo. Shortly after he began to write for British science fiction comic 2000 AD including the comic's flagship character Judge Dredd.

Ennis' first work on an American comic came in 1991 when he took over DC Comics' Hellblazer, which he wrote until 1994. Steve Dillon became the regular artist during the second half of Ennis's run. Towards the end of the run, Ennis and Dillon collaborated on a one-shot called Heartland, exploring the family life of Constantine's girlfriend Kit Ryan. Several years after leaving, Ennis briefly returned for the five-part Son of Man story with artist John Higgins.

Ennis' landmark work to date is the 66-issue epic Preacher, which he co-created with Steve Dillon. Running from 1995-2000, the series told the story of a preacher, Jesse Custer, who went on a literal search for God alongside his hitman ex-girlfriend and an Irish vampire.

Prior to that, from 1993 to 1995, Ennis and artist John McCrea worked on another DC title, The Demon, during which they introduced super-powered contract killer Tommy Monaghan, who was spun off into his own series, Hitman.

After the end of Hitman, Ennis went to Marvel Comics to write The Punisher. An initial 12-issue maxi-series then led to a 37-issue series, both largely illustrated by Steve Dillon. That series ended when Ennis decided to change direction, moving the comic from the Marvel Knights imprint to the mature readers Max imprint. The resulting series was violent, dark and largely focused on real-world crime. This run inspired two limited series (Born and Barracuda) and three one-shots (The End, The Cell and The Tyger). The creators of the movie Punisher: War Zone claim that this run was one of the major influences for that film.[1] While at Marvel, Ennis also wrote stories for Spider-Man, Ghost Rider, The Hulk and Thor.

In 2006 Ennis created The Boys, which was cancelled for unknown reasons by Wildstorm comics after just six issues despite high sales. The series was picked up by Dynamite Entertainment, and is now ongoing.

Other comics Ennis has written include War Story (with various artists) for DC; The Pro for Image Comics; The Authority for Wildstorm; Just a Pilgrim for Black Bull Press and both 303 and Chronicles of Wormwood for Avatar Press.

His work has won him a good deal of recognition in the comics industry, including nominations for the Comics Buyer's Guide Award for Favorite Writer in 1997, 1998, 1999, and 2000.