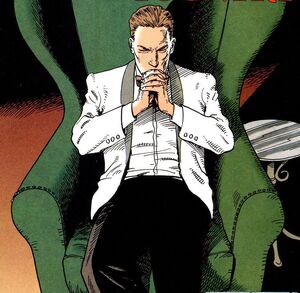 A high-ranking official of Heaven, Archangel Gabriel occasionally visits the mortal realm to do the "will of the Lord". As an angel, he is depicted as lacking any empathy with human beings and being generally indifferent to individuals. If he cares for man at all, it is as a species alone.

When John Constantine asked Gabriel to help him out with his lung cancer, calling in Gabriel's unrepaid debt to him, Gabriel turned him down and told John to die for his sins.

Enraged, Constantine planned a scheme involving Gabriel being seduced by a woman, who is actually  Ellie the succubus. Ellie successfully seduces and entraps Gabriel during passionate sex, before she rips his heart out and sends Gabriel running back to God in despair. Finally tainted and impure, God throws Gabriel back to Earth as a mortal; his wings torn and his powers gone.

By securing Gabriel's heart and cutting off Gabriel's wings, John managed to make Gabriel do his bidding, which involved finding mysterious information on how to defeat the First. It was short lived though, as Gabriel is later murdered by The First of the Fallen.

Gabriel makes a reappearance in the main DC Universe in Constantine:

The Hellblazer issue 11. Keeping up with his roots in Hellblazer, Gabriel appears as both a semi-anatagonist who's unwilling to help John Constantine in mortal crisis, as well as being an owner of a club.

Although not seen, Gabriel's powers were lampshaded many times in different flashbacks during the Fear and Loathing arc. He reminisced on how he singlehandedly destroyed whole cities such as Sodom and Gomorrah, and committed acts of genocide by killing all the first-born males in Egypt in just one night. Although destructive, Gabriel can also give blessings to those who deserve it. It was also him who impregnated the Virgin Mary.

Aside from that, he is also a very talented swordsman, and has the power of omniprescence.