This article is about the character. For the storyline, see The Family Man . 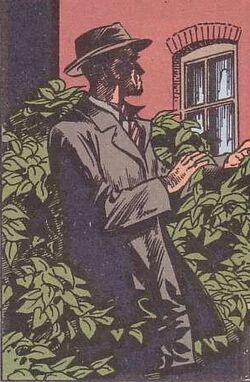 A former policeman and serial killer, the Family Man kills families, taking a souvenir, which he then sells on through a fence.

The Family Man was a pessimistic old man who, as a kid, was deeply distraught by the death of his beloved pet dog. After his father strictly advice him about being an upper-lip Brit who shouldn't let his emotions get through to him, the Family Man finally lost his empathy and became a sociopath. His first victims was his parents, whom he killed while they slept. At some point in time, the Family Man became a renowned police officer, but this occupation was only a front to hide his identity from suspicion.

His killing spree lasted for more than a decade, and his victims were apparently supplied by Jerry O'Flynn. When Constantine attempted to catch him but failed, the Family Man retaliated by killing Constantine's father, Thomas. He continued to stalk Constantine in various disguises before the magus manage to lure him into the streets. He attempts to kill John with a knife, but Constantine was ready and shoots him multiple times with a Webley revolver (later retconned to be a .357 Magnum in R.S.V.P.). After being shot dead by John Constantine, his body was then thrown into a lagoon.

He is noted to be missing in The Sandman story arc The Doll's House, where he was to have been the guest of honour at a serial killer's convention.

The Family Man possessed cunning and extraordinary physical abilities even though he was already in his old age. He is a master serial killer, so skilled that, for decades, he remained unidentified with no evidence being left left (due to his position in the police force). He is also adept at disguise and stealth.

Retrieved from "https://hellblazer.fandom.com/wiki/Family_Man?oldid=11107"
Community content is available under CC-BY-SA unless otherwise noted.