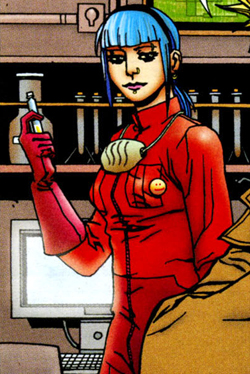 A young woman in her early 20s, Epiphany is of average height and has blue hair and facial piercings. Her clothing varies but usually has a punky or indie aesthetic.

She is a skilled alchemist, having been sent to alchemy school by her gangster father, Terry Greaves. Epiphany is a resourceful and intelligent young woman but has spent much of her life dominated by Terry and has severe anger issues, and tends to be sarcastic and crass around strangers. She hates having people - particularly men - poke into her private life and, if she finds out that they have done so, usually retaliates with physical violence.

She is prone to use sex as a tool, and has little restraint despite her father scaring off any suitors that he finds out about. She is not above sleeping with doting men to make other men jealous.

Epiphany and her father later moved out of London to nearby Essex, where she set up a full-time operation. When she was 15, she saw John Constantine talking to her father; noting that he was the only man never to show fear in front of Terry, she began to nurse a crush on him. She was working in Essex when John contracted her to make a love potion to win back the heart of Phoebe Clifton-Avery, an ex-girlfriend. Epiphany, who found John attractive herself, agreed but complications caused by John's pact with a demon left Phoebe dead. Epiphany then made a resurrection potion but warned of disastrous consequences if the user was less than pure. Predictably, things went wrong and the potion revived everyone in the graveyard except Phoebe. John fought off a wave of zombie attackers but not before one of them sank Epiphany into a magical coma. (Hellblazer issue 256-258, 2009)

With Terry threatening to turn John into meat pies, Constantine delved into the unconscious Epiphany's mind only to discover that she was in a self-induced coma. In her mind Epiphany was able to live forever as a child in 1996, a happy time just before her father sent her away to alchemy school and ruined her life. To save John's life she roused herself from her slumber. (Hellblazer issue 260, 2009)

Epiphany later received a message from an Indian mystic compelling her to find Constantine in Mumbai. There the pair of them defeated a terrible demon born in the Victorian era - thanks in no small part to Epiphany's research and alchemical skills. Epiphany allowed her body to be used as a vessel for Phoebe's spirit, allowing Constantine one last meeting with his ex. (Hellblazer issue 261-264, 2010)

Back in the UK Epiphany shacked up with a young punk to make John jealous. While not really wanting to sleep with the girl, Constantine nevertheless felt conflicted about his feelings for her. Epiphany also saved John from being beaten to death with some fancy gunplay. (Hellblazer issue 265-266, 2010)

Gradually, Constantine's feelings for Epiphany began to blossom into genuine love. However this was the cue for a curse implanted by Carew to kick in, sending John insane. Crazed, John beat Epiphany half to death, ruining her face, then chopped off his own thumb. Shade the Changing Man, an insane alien with the power of madness became obsessed with Epiphany, offering to repair her face if she'd go back to his planet with him. Despite an offer of marriage from a cured Constantine, Epiphany went with Shade. He fixed her face but also tried to turn her into his lost love, Kathy George. Epiphany spurned him, so the bitter madman sent her back in time to the London of 1979. (Hellblazer issue 267-270, 2010)

Trapped in London in 1979, Epiphany briefly met with her mother and father - neither of them knowing who she was - before shacking up with a young John Constantine. She eventually returned to the present day, where she and Constantine were finally married - though not before she accidentally wed The Demon Constantine and faced off with Nergal. (Hellblazer issue 271-275, 2010-2011)

All went well for the married couple until, for reasons unknown, Epiphany became suddenly repulsed by John's missing thumb, seeing the stump as a weeping, cancerous mess. While John did his best to find and restore his missing digit, Epiphany began calling on Lady Lazarus, her parasitic negative-energy spirit, to feed her with blood and make her feel better. John intervened and convinced Epiphany that she was strong enough not to need the Lady. He subsequently restored his thumb. (Hellblazer issue 277-Hellblazer issue 278, 2011)

By 2013, Epiphany saw first hand the death of her husband at the hands of one of her father's gangsters. The gangster was actually trying to make a name for himself by killing Constantine. Although she mourned John's death deeply, she nonetheless got revenge when her father tracked the ganster down and let Epiphany personally kill him. She managed to move on her life and found new love from John's nephew Finn Brady.