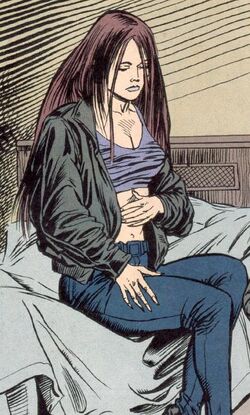 Chantinelle, or Ellie, is a demon who debuted in Hellblazer #43 (July 1991), and was created by Garth Ennis and Will Simpson.

Ellie is a disgraced succubus befriended by the notorious occultist John Constantine. She is subservient to the powerful demon Triskele. She is approached by the First of the Fallen while relaxing in her garden. He plans to use her to get to John Constantine, as they are old allies. She jumps across worlds to Earth, smashing through the inside of the Big Ben clock face. She falls into the Thames and hides in the London sewers, where she is found by Constantine. She describes the jumping as a task which severely hurts her; as she says 'I might never be well again'.

John ponders what had brought the two together in the first place. In an ill-conceived attempt to advance her standing in the leg

ions of Hell , Ellie, dancing on the border between heaven and hell, seduces one of the Heavenly Host, an angel named Tali. Her only mistake was to fall in love with him. They conceived a child together, and were forced to go into hiding. They approach Constantine, appearing on his doorstep as the only neutral party who might be willing to help them.

Constantine takes them to an empty house that had been cleared of squatters. He makes a brief visit to the Ravenscar Institute for the Criminally Insan , chatting with a demonically-possessed patient to see if Hell knows of the pair. They do not and Constantine returns to the house, thinking he is in the clear. He is not. Constantine neglects to consider Heaven's interest in the matter. He does ponder the possibility of utilizing the two later, a spy in heaven and a spy in hell. When Ellie's baby is born, a contingent of angels appear. They incinerate Tali in a burst of energy. Helpess, John can do nothing but listen as they take the child. It is a slow process which involves lots of blood and many unearthly, magical sounds that deeply distress John.

Back in the present, Constantine casts a spell upon Ellie, a mark upon her soul, which makes her permanently invisible to Hellish detection. In return, he demands her help in bringing about the Fall of the archangel Gabriel.

It is revealed that First of the Fallen is still pursuing the succubus with the aid of her former mistress, Triskele, a skeletonized snake with a woman's head. The pair travel to Earth to look for her. They confront Constantine, still bloody from the soul procedure and both realize that the succubus is invisible to them now. Out of spite, the First tears Triskele apart. Ellie is later seen in the park, having a difficult time becoming resigned to the fact she will never see her beloved hell again. The sigil would destroy her if she entered the infernal realms. An innocent compliment from a child greatly cheers her mood; moments before John steps in to discuss how to deal with the First. She agrees with his off-panel stated plan. In the end of the Rake at the Gates of Hell, Ellie successfully tricks the First into believing that she was Astra as a plot to make John suffer. As the three finally meet, Ellie stabs the the First, killing him, as an elaborate final card of John Constantine.

The First however, didn't actually die, and he returned to get revenge on John Constantine. By the end of Paul Jenkins' run, Ellie left John after he seduces her to regain his demon blood.

Later, John is traveling through Hell again in an attempt to free his sister, Cheryl. Ellie appears, wanting a brief dalliance. The demon Nergal, currently controlling John, threatens her into leaving and staying quiet.

Later, Ellie aids John in stealing a book, the lost Gospel of Constantine, from the Vatican's Black Library.

As a denizen from Hell, Ellie has the normal attributes of a demon which includes enhanced strength and longevity.

Although her true form resembles that of a classical demonic appearance (red leathery skin, horns, bat-like wings, razor teeth and finger nails), Ellie is a Succubus and therefore she is able to take on the forms of her victim's fantasy woman or even their lover. Once trapped her victim she draws energy/essence to sustain herself often to the point of their exhaustion or even death.

Actress Michelle Monaghan was cast as Ellie for the 2005 movie Constantine. Her scenes were cut from theatrical release and in the finished movie Monaghan only appears on screen for a few seconds and is not identified. The Director Francis Lawrence explained that the decision to cut Ellie out of the film was to make Constantine more of a lonely character. Deleted scenes featuring Ellie were subsequently included on the DVD release, though they were not integrated into movie proper.