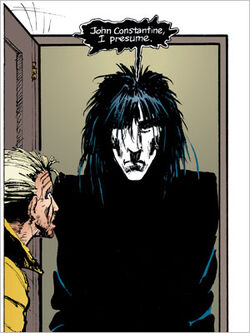 Dream, or Morpheus, is an Endless and is both lord and personification of all dreams and stories, all that is not in reality.

Morpheus usually appears as a tall, thin man with bone-white skin, black hair, and two distant stars looking out from the shadows where his eyes should be. Most often they are silver, blue, or white, but when he becomes angered, they have been known to turn red. Morpheus' appearance ranges widely "depending on who's watching." People generally perceive him as wearing a style of dress appropriate to their region and era. In the Dreaming, he is often seen wearing a grey t-shirt and dark pants. He appears to be light skinned when interacting with white characters, but the people of primordial African city see him as a star-eyed black man.

Dream once met John Constantine as he joins Morpheus in search of his pouch of sand, specifically, and the other magic items he once possessed and lost while being held captive for 70 years by Roderick Burgess. (Sandman Issue 3 - Dream a Little Dream of Me) The pouch wound up in the possession of one of John's ex-girlfriends.

Dream also had further adventures with one of John's ancestores, Lady Johanna Constantine.