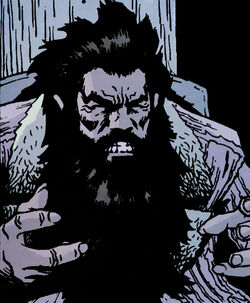 Donatus Chalice is a monk, werewolf and occasional - usually unwilling - ally of John Constantine. He is also an associate of Clarice Sackville. He first appeared in Hellblazer issue 189.

In his human form Donatus Chalice is an imposing figure: tall, barrel-chested, hirsute and given to furious outbursts when cornered. However, his faith - he is a Christian monk - ensures that he tries to remain level-headed where possible and appears to be continually exercising extreme self-control. Despite his belief in Christianity, he apparently does have some magical ability that he will deploy in self-defence, as seen in Hellblazer issue 189.

During a full moon, however, Chalice transforms into an even taller bipedal wolf with enough strength and speed to kill a demon. To resist this transformation he wears a crucifix at all times; if he is separated from it, he cannot resist the change. Even when transformed, however, he appears to have enough self-control not to harm his friends.

Should he be provoked into anger in his human form then elements of his wolf form may push through, including his nails turning into claws and his incisor teeth lengthening.

Chalice was first introduced at the climax of The Shadow Dog saga, as part of Constantine's magical taskforce to destroy the creature. However an unseen force inhabiting one of the group drove another member, Alba, temporarily insane. She telekinetically levitated a series of swords from across the room and skewed Chalice before he could react. His body was left in a cellar and subsequently chewed on by the possessed team-member. (Hellblazer issue 189, 2003)

However, Chalice's supernatural nature meant that this did not kill him outright. Constantine contacted him a few years later to help tackle a demon that was liquefying and consuming the innards of homeless men. Chalice was persuaded to help and used his wolf form to tear the demon apart. (Hellblazer issue 229, 2007)

Chalice's most recent appearance was in Hellblazer issue 247 when the blood mage Mako attacked The Tate Club, London's hub for magicians. A psychic distress call was sent out, attracting both Chalice and Clarice Sackville. However the pair arrived too late to stop the occupants of the club from being massacred.