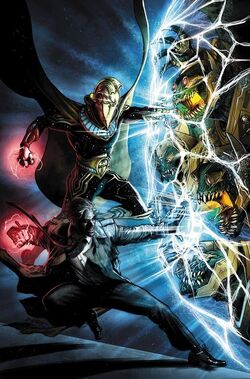 Dr. Fate is a powerful sorcerer and master of the mystic arts in the DC Universe. Although many have taken the mantle of Dr. Fate over the years, John Constantine and the original Dr. Fate first came face to face (in comic book appearance) in the DC series Books of Magic, in which he introduces the young Timothy Hunter to the sorcerer. In the New 52, Constantine would meet the Earth 2 Dr. Fate, hosted by Khalid Ben-Hassin, in the story arc World's End.

After John was thrown in Earth 2 and meeting his alternate self (who had a kinder personality and loved by his family, unlike Constantine), he was tasked into saving them when Darkseid's minions was almost successful in conquering their world. Constantine also kills Dr. Fate's archenemy Wotan. Dr. Fate becomes an uneasy ally of John Constantine and his family as they try to survive the parademons, but later becomes an enemy when the Helmet of Fate tried to take over John Constantine. The magus manages to fight him off, but his mother was killed in the process.

Fate reappered later again in a possible future in World's End. He and an alternate version of Constantine battled each other, before Constantine uses a powerful Anubis illusion spell to kill Dr. Fate. John later acquires the Helmet of Fate and becomes the new Dr. Fate; the most powerful magician in the world.

Retrieved from "https://hellblazer.fandom.com/wiki/Doctor_Fate?oldid=10922"
Community content is available under CC-BY-SA unless otherwise noted.