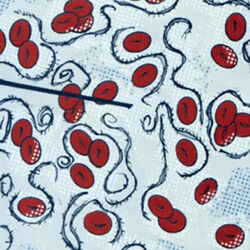 Demon blood is a substance found in the Hellblazer comic books and has been a recurring plot element within the series for the majority of its existence. Demon blood, when injected into the body of a human being, causes the host to be instantaneously - if somewhat painfully - healed. It also has the additional function of allowing the demon to find the host's body wherever they are in the world, if they are not magically protected.

It appears to retard the ageing process somewhat (John Constantine has commented that he looks younger than his 50+ years thanks to its presence in his system) and may aid in fighting off illness and increasing his healing process, to the point of regenerating non-fatal wounds quickly (Haunted). But it certainly didn't stop John from getting lung cancer (although it was found out that the cancer was transfused by the powerful Golden Child using synchronicity ).

Contracting a demonic taint in the blood isn't just done via direct transfusion, however; after magically removing the demon blood from his body, Constantine re-acquired the taint by having sex with Ellie, a succubus. This is the same taint that he carries in his veins to this day. The blood contains corossive properties that can dissolve many materials like flesh. Anyone that digests the blood can have nasty results, even death. (Hellblazer issue 69) Though it cannot affect anyone who has the same blood host, like when John sipped Angie's blood without getting hurt because Angie got her demon blood from John. (Reasons To Be Cheerful )

As doctors Malachy Young and Jonathan Yorke discovered in the City of Demons miniseries, demon blood - if properly treated - can also be used to turn people into psychotic slaves. However, these slaves remain subservient and psychically linked to those higher up the 'food chain', as it were - in that case, John Constantine.

While hospitalised with multiple broken bones, Constantine was visited by the demon Nergal who wanted him to do his bidding. He injected John with his blood, instantly healing his wounds and psychically connecting them. Later, after John had hidden himself from Nergal with magic, Nergal was still able to make John's skin bubble and blister by controlling the blood. (Hellblazer issue eight and 12, 1988).

While down-and-out, John found himself preyed upon by The King of the Vampires, who offered him a place as his right-hand man. When John turned him down, The King lunged for his neck - only for his jaw to melt off the moment it came into contact with the blood. John was then able to drag the crippled king out into sunlight, killing him. (Hellblazer issue 69, 1993)

After being given the choice between letting a child die and sacrificing his soul to Hell, John came up with a clever plan: he sheared off the worst bits of his soul, placed them - and the demon blood - in a golem and animated it, allowing this Constantine copy to die in his place. Later, John realised that he needed to reacquire an element of his darker side and slept with Ellie, a succubus, reacquiring the taint. (Hellblazer issue 94-Hellblazer issue 96, 1995; and Hellblazer issue 104, 1996)

While investigating a series of suicides in a council block Constantine met Angie Spatchcock, an amateur investigator. She got too close to the truth and was cut to ribbons by a couple of thugs. Needing the information she had, Constantine injected her with his blood, instantly healing her. (Hellblazer issue 175-176, 2003)

In the Books of Magic, Constantine warns young Timothy Hunter to be careful around him because he doesn't want anything from his "blood stream" to be touched by Timothy. Probably warning him about the blood's corrosive properties.

After being hit by a car, Constantine wound up in intensive care. There, a pair of doctors - Malachy Young and Jonathan Yorke - discovered the demon blood in his veins. Hoping to impress Hell itself by unleashing chaos on London they began combining the blood with various agents and injecting them into patients, creating an army of psychotic slaves. Constantine was able to stop the doctors' plans and drain the blood out of the slaves without killing them. (City of Demons issue one-five, 2010)