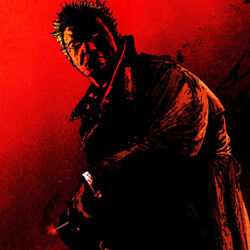 Demon Constantine is a demonic double of John Constantine composed of all of the least desirable parts of Constantine's personality, infused with Nergal's demon blood and Aleister Crowley's soul. He is unable to leave Hell for any great length of time unless he is properly summoned. He first appeared in Hellblazer issue 94.

The Demon Constantine has taken many appearances during his time in the comic; originally he looked exactly like John but with flaking, scabby skin. Later he took the form of a green-skinned, worm-filled, rotting corpse. And most recently he has begun to look exactly like John himself, with only all-red or all-white eyes - and a scar on the wrong cheek - to give him away.

The Demon Constantine was created by John as a way to siphon off the worst parts of his personality, including his alcoholism, his yearning for ex-girlfriend Kit Ryan, his demon blood and his most base urges. These were placed into a golem and animated. The result was a man who looked and thought very much like John Constantine at his worst. The creature then matured into a fully-fledged demon and began to develop his own thoughts and feelings.

Despite this - and a talent for casual brutality when pushed - The Demon Constantine isn't evil as such and still retains affection for Constantine's friends (and hatred of his enemies). He is, however, capable of doing terrible things to get his own way. For example, in Hellblazer issue 275 he beat the real John Constantine to death (albeit temporarily - John's tough), hoping to take his place on Earth. He then sexually assaulted John's niece, Gemma, believing that she 'wanted it' - though he was shocked, ashamed and full of self loathing when he realised how wrong he was. It says something about Constantine's personality that the only person The Demon Constantine has shown genuine murderous rage towards is John himself.

Having learned that the only way to save a kidnapped child would be to send his own soul to Hell, John Constantine used a spell by Aleister Crowley to create a golem into which he poured the worst aspects of his soul, as well as his demon blood. The golem's longevity was bolstered by absorbing the soul of Crowley himself. The golem then chose to commit suicide, but not before tricking Hell into releasing its hold on the souls of every child it had. (Hellblazer issue 94-96, 1995)

After dying, the golem was sent to Hell. But Crowley's soul, still inside him, took the punishment directed at him, leaving the golem free to wander the plane. He ultimately became a true demon and, when asked by John to merge back with him - John was missing the dirtier side of his soul - he refused. Instead, he suggested John sleep with Ellie to regain his demonic taint. (Hellblazer issue 103-104, 1996)

Later, Crowley was able to escape Hell - leaving The Demon Constantine in pain. He begged to join back with John but John refused. Ultimately, John was able to arrange for Crowley to be restored to Hell, leaving his double in the clear. (Hellblazer issue 126-128, 1998)

The Demon Constantine continued to live in Hell for years, but slowly grew homesick for Earth. When he learned that Constantine's body and soul were to be auctioned by a magician named Ghant he attended the auction but fled with the other bidders when The First of the Fallen gatecrashed the proceedings. (Hellblazer issue 198-199, 2004)

Eventually John visited Hell to retrieve the stolen soul of his sister, Cheryl. There he met The Demon Constantine, who demanded to exchange places with him. However, Nergal intervened and The Demon Constantine ended up with his throat ripped out. (Hellblazer issue 208, 2005)

The Demon Constantine didn't die, though - he merely recuperated in Hell until Beano, a former drummer with John's old punk outfit Mucous Membrane, accidentally summoned him. The demon killed him without a thought and used Beano's invitation to John's upcoming wedding to find his prey. He then killed John and took his place at the wedding, marrying Epiphany Greaves and sexually assaulting John's niece Gemma. However, Nergal arrived on the scene and tore out The Demon Constantine's heart - only to die in turn when a reanimated John snuck up and killed him. (Hellblazer issue 274-Hellblazer issue 275, 2011)