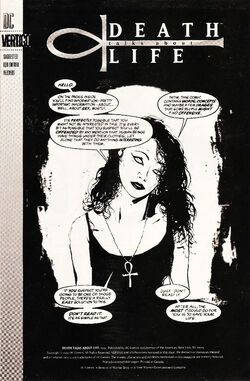 Death Talks About Life is a short 'story' PSA designed to raise awareness of HIV/AIDS and safe sex that ran in certain Vertigo comics in January 1993, and later appeared as a self-contained, eight-page pamphlet for use in American schools.

After warning the reader that what she has to say may offend those who are 'offended by any mention that human beings have things under their clothes, let alone that they do anything interesting with them,' Death talks about HIV/AIDS: how it's contracted and how the reader can minimise exposure.

At the midway point she calls on John Constantine to show how to put on a condom using a banana as a prop. John seems uncharacteristically embarrassed by the whole affair. She concludes by warning that there's another unexpected by-product of unprotected sex: life, in the form of unplanned children.

She signs off by advising the reader to check the back page for HIV/AIDS awareness and support numbers, and to dispose of his or her banana peels wisely.

Retrieved from "https://hellblazer.fandom.com/wiki/Death_Talks_About_Life?oldid=10333"
Community content is available under CC-BY-SA unless otherwise noted.