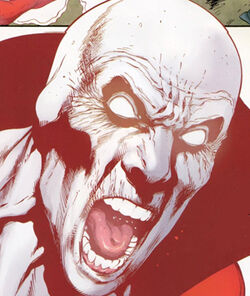 Deadman, aka Boston Brand, is a former circus acrobat who was murdered; his spirit was subsequently given the ability to possess the living by the goddess Rama Kushna, who allowed him to return to Earth to find his murderer. He is a member of Justice League Dark, along with John Constantine.

Prior to his death, Boston performed as 'Deadman', wearing a bright red circus suit and ghostly white makeup. Upon dying, this uniform became his natural appearance, albeit with slightly wrinkled and puckered skin. Since then, Boston's appearance has occasionally changed (sometimes due to attempts to exorcise him), sometimes giving him an emaciated, skeletal look. He generally returns to a more 'healthy' appearance eventually, however.

Boston is, despite his unfortunate condition, generally portrayed as being a good-humoured and down-to-Earth guy, albeit one given to moments of frustration about his inability to either return fully to life or to pass on into the afterlife.

Shot down in the middle of his act by a hook-handed assassin, Boston Brand found himself given a ghostly form by the Hindu goddess Rama Kushna (she was invented for the story; her name is a corruption of Rama-Krishna). She gives him the ability to possess the living so that he can return to Earth and uncover the who killed him and why - often saving lives and helping people along the way.

Initially it was revealed that the hook-handed man was training to join an assassin's league, and that Brand was a random killing to gain acceptance. Later it was ret-conned that the hook-handed man he caught was not the killer, but one of many members of the Scavengers, a criminal group comprising people with missing limbs. With the identity of his killer still a mystery, Boston was returned to Earth.

In the miniseries Brightest Day, Boston became the bearer of the White Lantern and White Ring, which allowed him to tap into a mystical source of light energy. The ring promised that it would bring him back to life if he did what it asked, which he did. Ultimately, it was revealed that the lantern's plan was to restore Swamp Thing to the world, allowing him to defeat a death-powered Dark Swamp Thing. He succeeded, but unfortunately gave his newfound life to protect a fellow hero, Dove, and returned to his path as a ghost.

Boston made a couple of small appearances, along with John Constantine, in the original Books of Magic miniseries.

From 2006 to 2007, Vertigo ran an ongoing Deadman series that was unconnected to the DCU character save for the title, the appearance of Brand's 'Deadman' alter-ego and certain character names. It was also entirely self-contained, and connected with neither DC Universe nor Vertigo Universe characters or comics.

Retrieved from "https://hellblazer.fandom.com/wiki/Deadman?oldid=9410"
Community content is available under CC-BY-SA unless otherwise noted.