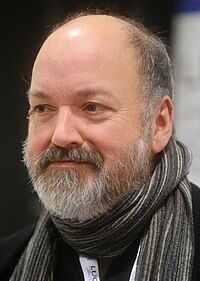 After a trip to New York in 1986 during which he failed to find work as a comics artist, McKean met writer Neil Gaiman and the pair collaborated on a short graphic novel of disturbing childhood memories, Violent Cases, published in 1987. This was followed in 1988 by a Black Orchid miniseries (again with Gaiman) and Hellblazer covers for DC Comics.

Beginning in 1989 he produced the covers for Gaiman's celebrated series The Sandman, all its collected editions and many of its spin-offs, and the Batman graphic novel, Arkham Asylum: A Serious House on Serious Earth, with writer Grant Morrison (1989). His work during this period was often compared to that of Bill Sienkiewicz.

In 1995 he wrote and illustrated a book for The Rolling Stones called Voodoo Lounge to tie in with the release of their album of the same name. In 2005, he designed the poster for the 32nd Telluride Film Festival. In 2006, he designed projections, sets and directed film clips for the Broadway musical, Lestat, adapted from Anne Rice's novels with music and lyrics by Elton John and Bernie Taupin. His most recent projects are directing an original feature called Luna, and a book with the evolutionary biologist Richard Dawkins.

Between 1990 and 1996 McKean wrote and drew the ten issues of Cages, an ambitious graphic novel about artists and creativity, illustrated in a stripped-down pen and ink style influenced by Alberto Breccia, José Antonio Muñoz and Lorenzo Mattotti. Cages was published as single volume by Kitchen Sink Press in 1998, and in a new edition by NBM Publishing in 2002. In 2010, Cages was released by Dark Horse Comics in paperback for the first time.

Further collaborations with Gaiman produced the graphic novels Signal to Noise in 1992 (previously serialised in The Face magazine), about a dying filmmaker and his hypothetical last film, and Mr. Punch, which explored similar themes as Violent Cases through the imagery of the Punch and Judy show.