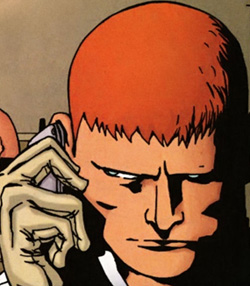 Darren is a hospital porter who 'cared' for John Constantine when he was placed in a mental hospital in 2010. His boyfriend is the artist Leo.

Darren is a well-built white male with short red-blonde hair and blue eyes. He seems to take particular delight in manhandling difficult patients and thought nothing of stealing John's severed thumb to help his boyfriend, Leo. He seems to aspire to become a member of the artistic set, something that Leo seems unconcerned about helping him with.

Darren was first introduced as just another mental hospital orderly getting between Constantine and the outside world. A more sinister side to his nature was revealed when he and a colleague attempted to catch John, who - with typical slipperiness - escaped their grasp, stole some keys and locked them in a room. Darren called up an unknown party and told them that Constantine had escaped. He subsequently stole John's severed thumb (John, utterly insane, had done this to himself) for this person. (Hellblazer issue 268, 2010)

It turned out that the person he'd taken the thumb for was his boyfriend, an artist named Leo, who wanted to draw upon Constantine's madness to give himself a creative boost. Neither of them thought that he was anything more than just another mental patient, however... (Hellblazer issue 269, 2010)

After John - now sane - returned to the mental hospital in search of his thumb, Darren went to warn Leo but Leo was too concerned with an art critic whom he'd told a dark secret to. Darren suggested that he might know someone who could deal with it. That night the critic suffered a potentially fatal car crash. (Hellblazer issue 277, 2011)