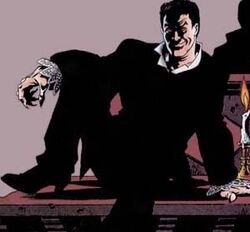 Darius (b. 1030, d.1999) is a vampire. He was first shown living in London, where he was a lover of The King of the Vampires, but later relocated to Gotham City. He first appeared in Hellblazer issue 68.

Darius is a dark-haired, thin and cruel man who takes a particular delight in murdering innocents to quell his thirst for blood. He is impulsive, a nymphomaniac and unusually vicious even by vampire standards.

He was deeply in love with The King of the Vampires and was ready to kill himself when the King died - but changed his mind immediately upon realising that with the King dead he was effectively the new King himself.

Darius was either turned into a vampire in 1030 or born as a human that year and turned a couple of decades later; either way, he spent the next 900 years visiting atrocities upon millions of people. Some of the things he claims to have done include sucking jellied eye from the arrow that killed King Harold; licking blood from the lances of Sioux warriors; eating burned children in Dresden and drinking irradiated blood from survivors in Nagasaki. (Hitman issue 68, 1999)

At some point after WWII Darius began living in caves far beneath London's sewer system with The King of the Vampires. One night in 1993 he told the King about his cunning plan: to turn Prince Charles into a vampire in order to see how the royal family would deal with that. The King talked him down and invited him out to meet Mary, another vampire from out of town. The three murdered and drained a man but Darius, still hungry, decided to stay out a little longer, turning to mist so that he could drink the blood of babies in the womb. (Hellblazer issue 68, 1993)

The King had told Mary and Darius that he would return to them before the sun rose. But he fell foul of Constantine, who managed to trap him in sunlight and kill him. The King's death was felt inside both Darius and Mary, and a grieving Darius - seeing no reason to live any more - climbed out of London's underground and towards the sunlight. (Hellblazer issue 69, 1993)

But on the way he realised: if The King was dead, then he was the next in line to the thone. Retreating once more into the darkness, he declared himself the new King of the Vampires. Six years later, Gotham City fell victim to an earthquake that left it devastated. It was written off by the US Government and declared a 'no-man's land'. Seeing an opportunity to build himself a kingdom he and at least a dozen other vampires arrived in the city to claim it as their own. When one of their number killed a child, however, hitman Tommy Monaghan and his friend Natt took it upon themselves to stamp out the menace. (Hitman issue 38, 1999)

They tracked Darius and Mary to a church, where Darius offered to let them be his human representatives. They refused and escaped, returning with a rag-tag group of other hitmen to wipe the nest out. Darius was almost able to kill Tommy, but got a grenade in the chest for his trouble, reducing him to a severed head. Nevertheless, he lived still - and would have survived if Tommy's friend hadn't driven a bulldozer through the side of the church, letting in sunlight that killed every vampire inside - including Darius and Mary. (Hitman issue 39, 1999)