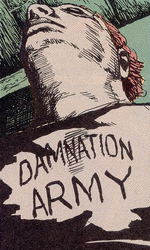 The Damnation Army is a legion of lost souls enslaved and pressed into service by the demon Nergal. The group is responsible for a series of mass murders and suicide pacts throughout the London area in the late 1980s. Primarily, Nergal's efforts were focused on defeating his most notorious adversary John Constantine. Destroying Constantine was not enough for Nergal however. Instead, he wanted to recruit him.

One of the members of the Damnation Army (known only as the Man) performed a series of bizarre rituals in the cellar of his forest cabin. He abducted young girls and brainwashed them into becoming his brides. To consummate the marriage, he choked each of his brides with a thick cord near to the point of death, leaving a "wedding ring" scar across their throats. Ten-year-old Gemma Masters, niece to John Constantine, became one of the Man's brides, but John managed to rescue her before the Man could cause her any undo harm.

Retrieved from "https://hellblazer.fandom.com/wiki/Damnation_Army?oldid=11365"
Community content is available under CC-BY-SA unless otherwise noted.