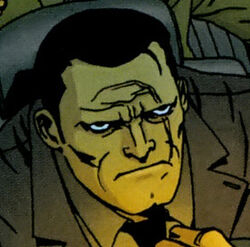 Cuts is a gangster and one of Terry Greaves' right-hand men. He is usually seen partnered with Stevie and first appeared in Hellblazer issue 260

Stevie is a bulky man with short brown hair and a circular scar across his forehead that extends down onto his face. He's usually shown as a tough, hard-to-scare killer.

After John Constantine accidentally rendered the daughter of gang boss Terry Greaves catatonic, Stevie and Cuts were sent to his flat to collect him for 'questioning'. Unlike Stevie, Cuts wasn't fazed by John's reputation as a magician. However, when they broke the door down they found Constantine dead. This turned out to be a ruse on John's part and to lure John out of his hiding place, Cuts and Terry kidnapped and tortured Chas Chandler. Cuts was later going to help Terry kill John until John talked his way out. (Hellblazer issue 260, 2009)

Terry later approached John with an offer: help him fend off some aggressive Afghan gangsters in exchange for a lot of money. Constantine turned him down flat and nicked a bottle of whiskey into the bargain, leaving Cuts - who was driving the pair - to ask whether Terry wanted him beaten up. (Hellblazer issue 273, 2011)

John eventually hooked up with Terry's daughter, Epiphany, but Terry - being rather protective - decided that he'd rather have Constantine dead. He went around to John's flat with Stevie and Cuts to do him in, but the three walked into a magical trap that turned their guiltiest memories into hallucinations. What Cuts saw was never shown, but it reduced him to a gibbering wreck, shouting 'I don't know where your lips are! I haven't got your fucking lips!'. (Hellblazer issue 274, 2011)

John later agreed to help Terry against the Afghans in exchange for permission to marry Epiphany. Terry agreed, and both Cuts and Stevie were on guard duty at the event. (Hellblazer issue 275, 2011)

Retrieved from "https://hellblazer.fandom.com/wiki/Cuts?oldid=7017"
Community content is available under CC-BY-SA unless otherwise noted.