This may not be the page you're looking for. Please see Constantine (disambiguation) for other pages titled Constantine. 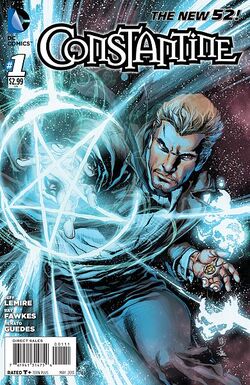 Constantine is an ongoing comic book series published by DC Comics, which started in March 2013. It follows the story of a British magician, John Constantine and replaces the former Vertigo Comics title Hellblazer, which ended with its 300th issue after 25 years, in February 2013.

The series finally ended on its 23rd issue in May 1, 2015 and replaced by a new comic book series entitled Constantine: The Hellblazer.

The series takes place in a seperate continuity to the one established during the Hellblazer series, returning John Constantine to the DC Universe where he originated, specifically during the "New 52" initiative which attempted to reboot many of its characters. Initially, the new Constantine's origin story was radically altered and he was unable to enter London again due to a curse that had been put upon him some time hence, and therefore his detective practice has been set up in New York. John now faces villains such as Sargon and Mister E.

Retrieved from "https://hellblazer.fandom.com/wiki/Constantine_(comics)?oldid=11059"
Community content is available under CC-BY-SA unless otherwise noted.