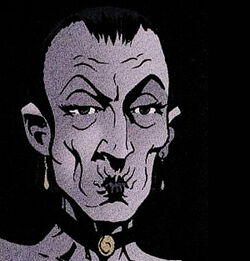 Clarice Sackville is an elderly magician of considerable power, a high-ranking member of The Tate Club and an ally and former lover of John Constantine. She first appeared in Hellblazer issue 134.

Although her exact age has never been given, Clarice has consistently been portrayed as an elderly woman, appearing to between 60 and 70 years old, and is actually over 200 (she was present at both the founding and the bicentennial of The Tate Club). She speaks with a refined - perhaps theatrically so - upper-class English accent.

She is consistently portrayed as being physically frail and vulnerable to physical attack. In Hellblazer issue 202, a magical assassination attempt by one of John Constantine's demonic children caused her to collapse, possibly due to a heart attack, and she was subsequently hospitalised. In Hellblazer issue 247 she was physically aided by Donatus Chalice while walking to The Tate Club.

Despite her physical vulnerability, Clarice has an indomitable, no-nonsense attitude, and takes delight in cutting through bullshit wherever she sees it - especially when it's John Constantine's. She is an extremely intelligent and calculating woman, and won't hesitate to use extreme methods to achieve her ends if she deems them necessary, such as using the soul of her associate, Packer, as bait for a demon that could subsequently be used in a supernatural turf war.

Clarice's friendship with Constantine dates back at least to 1977, when she went down on him in London's Highgate Cemetary when he was 24. Since then the pair have maintained a friendship, with John visiting her 'once a year, regular as clockwork, except when he doesn't'. At some point she also met Albert Case, a former 'court magician' to the Kray Twins, who subsequently became her lover, confidant and right-hand man. (Hellblazer issue 134, 1999).

Her first appearance in Hellblazer was in 1999, after Constantine discovered that his ex-girlfriend, Isabel Bracknell, had been raped and murdered. She warned him away from pursuing her killer, saying that he was just using Isabel as an excuse to indulge himself in the worst aspects of his character. John later showed her Isabel's diary, detailing how the girl was willingly used and abused by her new boyfriend, the magus Joshua Wright. Clarice refused to have any sympathy for the girl, saying that she 'acted like someone had flipped open her head and turned her brain off', but agreed to introduce John to Albert, whom John needed to help move Isabel's ghost on into the afterlife. (Hellblazer issue 134-138, 1999)

John spent the early '00s in America; when he returned to London, he found himself in the middle of a magical turf war between The Tate Club and a Zimbabwean gangster named Domine Fredericks, who was looking for a mysterious item known as the Red Sepulchre. The other members of the Tate's board believed that Constantine was colluding with Fredericks, while Clarice was torn between believing them and trusting John. Eventually Domine's men led an attack on The Tate Club, killing many of its occupants, although Clarice and Albert managed to escape. Clarice raised a demon in retaliation but Joshua Wright, now working for Domine, managed to put it down. John, with the help of Map, later saved Clarice and Albert from Domine's men. In return they helped protect John's niece, Gemma, from Domine while John rescued her. (Hellblazer issue 177-Hellblazer issue 180, 2003)

Domine, unfortunately, had begun a chain of events that resulted in The Shadow Dog, a harbinger of the apocalypse, being unleashed upon the world. Clarice, along with several other magicians including a werewolf named Donatus Chalice, was called upon by John to summon, bind and destroy the dog. They managed to do so, only to discover that it was actually protecting humanity from the true thread: a monster named The Beast. Infuriated that they had been duped, Clarice gave John a piece of her mind and fled into the night. (Hellblazer issue 189-Hellblazer issue 191, 2003)

Later, John's friends and acquaintances found themselves under attack by his half-demon children. The youngest, Adam, created a spell that caused the glass on the street outside The Tate Club to shatter into a whirlwind. Albert was able to push Clarice into The Tate Club and lock the door, but was subsequently shredded. Clarice then collapsed, possibly due to a heart attack, and was hospitalised. She claimed that losing Albert was like having her heart torn out; John told her that she should continue with her life, to give Albert's death some meaning but she waved him off, saying that platitudes don't suit him. (Hellblazer issue 202, 2005)

Later, Constantine - grieving over the loss of his sister, found himself imprisoned for assault and contempt of court. Clarice bought him bail and told him to get on with his life, as she had. He immediately won her the money back playing poker at a casino, then went to a party being held at The Tate Club. Angry at their arrogance and the danger they put people in, he cast a spell that showed all of the magicians how they would die. Clarice, appalled, told him that no magician in the world would ever help him again. (Hellblazer issue 214-215, 2006)

Many years later, an African magician named Mako laid waste to The Tate Club, killing all its occupants. Clarice, joined by Chalice, arrived too late to stop the attack but escaped the magician's wrath. (Hellblazer issue 247, 2008)

The character of Clarice Sackville from the Vertigo series was readded in the current DC Universe, making an appearance in The Hellblazer issue 2. She is depicted to be one of the most powerful magician in London, owner of the Tate Club, and an immortal who can make herself appear younger than she is.