Start a Wiki
City of Demons #5 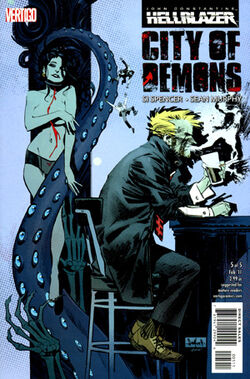 City of Demons #4 L. January 2010) is the fourth issue of a five-part miniseries. The whole, horrible adventure is now at an end - and for once Constantine might just get the girl. But does he want to...?

Constantine awakes to find himself tied up and Marie dead, her body being eaten raw by the infected patients. Yorke and Young welcome him to their lair and explain that he is witnessing the birth of 'a new order' - that they intend to impress Hell itself by turning London into a killing ground in which the streets run red with gore. They tell two of the infected to eat John but as the origin of the infection, Constantine has full control over the patients and tells them to untie him.

Yorke and Young panic - they'd given him a drug to stop him from fully regaining consciousness and yet it doesn't seem to be working. What they don't realise is that it is working - John is in agonising pain. But to make sure they stay off guard he's fighting it, giving the impression that he's just fine. He binds them inside a chalk circle and opens up a gate to Hell, casting them down into the pit.

With the doctors gone, John orders the infected to line up against the wall. He injects them with an anticoagulant and creates a tiny nick above the jugular, allowing the demonic blood to flow out slowly. At that moment Marie enters the room - it turns out that she was alive all along and that the meal John had seen earlier was someone else.

Marie invites him back to her place, and as she takes a shower, John decides to poke about - and finds a wardrobe full of S&M gear and sex toys. John's into it until another killer headache kicks in - and Marie, now also infected with the demon blood - clobbers him over the head with a bedside clock.

She straddles him and says that she infected herself, hoping to create a demonic child with their combined blood. As she chokes him, he manages to grab a scalpel from his coat and slash up at her neck - not severing the jugular, but making a small cut just like he did on the infected. She falls back, clutching her neck, and faints. John force-feeds her some rat poison - another anti-coagulant - before slipping out the door.

Back at the pub where this all began, John checks the time and decides that the infected - and Marie - have had enough time to bleed out now without dying. He calls for a small fleet of ambulances to swoop in and pick them up before they expire, then heads back for a quiet pint.

Retrieved from "https://hellblazer.fandom.com/wiki/City_of_Demons_issue_5?oldid=8801"
Community content is available under CC-BY-SA unless otherwise noted.