Start a Wiki
City of Demons 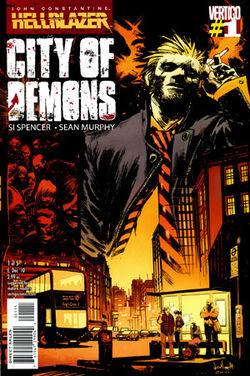 City of Demons was a five-issue Hellblazer miniseries that ran semimonthly from December 2010 to February 2011.

After a car accident leaves Constantine hospitalised and trapped outside his body, a pair of villainous doctors find a terrifying use for his demon-tainted blood. With gruesome crimes happening across London and more falling victim to the doctors' plans every day, only John Constantine and hapless nurse Marie Cameron stand between England's capital and Hell on Earth.

The series was originally commissioned, written and drawn in 2008 for the main Hellblazer comic.[1] However, for reasons unknown it wasn't released until 2010 - and pushed out as a miniseries rather than being folded into the main line. Enjoy the soundtrack for the story while you read.

Retrieved from "https://hellblazer.fandom.com/wiki/City_of_Demons?oldid=8612"
Community content is available under CC-BY-SA unless otherwise noted.