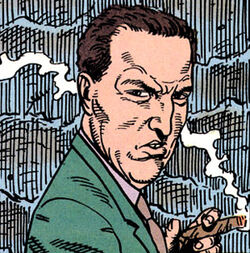 Charlie Patterson is an English fascist and an enemy of John Constantine. His first appearance was in Hellblazer issue 43.

Patterson is a short, weak-chinned and portly man with a receding hairline and a bad disposition. He is an arrogant, manipulative figure who exploits the racial hatred of others to maintain a position of power and control - although he's got a nasty streak of racism in him, too.

Patterson and John Constantine had met some time prior to his first appearance in the comic in 1993. In that issue John encountered Charlie in posh drinking establishment The Cambridge Club, where he was trying to convince the angel Gabriel to help him out. The pair passed sharp comments and went on their way. (Hellblazer issue 43, 1991)

Gabriel and Patterson continued to meet over the following years - although God's refusal to punish Gabriel for communing with a sinner and racist troubled the angel. Patterson, however, didn't know about this. All he wanted to do was to keep a powerful being on his side. He had plans: recognising a growing tension between racial communities in Britain, Patterson hoped that this would become outright war, becoming a leader of his own group of thugs and maintaining his hold over them. Gabriel would be a useful ace in his pocket. To ensure that nobody interfered with this, Charlie hired men to work at The Cambridge Club to keep an eye on the angel. (Hellblazer issue 66, 1993)

Trouble came in 1993, when Gabriel - visibly troubled by his association with Patterson - began walking aimlessly around London after his Cambridge Club visits rather than flitting back to Heaven. Sensing the angel's anxiety, Thompson, one of Patterson's goons, tailed him and saw him meeting with a young Christian woman. Correctly guessing that Constantine was behind this odd turn of events, Thompson told Charlie who sent his men out to cut up John's girlfriend, Kit, as a 'message'. (Hellblazer issue 64-65, 1993)

However, when Kit proved to be a tough nut to crack Patterson sent his boys out to grab John instead. They also took John's black friend, Dez Ridley, along for the ride. With the pair tied up, the thugs beat and cut Dez to shreds, leaving him to bleed to death in front of John overnight. In the morning Charlie and his men came to finish off John, but he was able to wriggle his way out of it by lying that he would hand Gabriel over. Charlie sent out his men to dump Dez's body, which was seen by Dez's brother George. As Charlie got up to leave he was felled by a shotgun blast to the chest, courtesy of George, who finished the job by blowing the prone man's head off. (Hellblazer issue 65-66, 1993)

Retrieved from "https://hellblazer.fandom.com/wiki/Charlie_Patterson?oldid=6998"
Community content is available under CC-BY-SA unless otherwise noted.