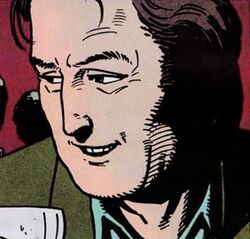 Brendan Finn is a magician and close friend of John Constantine. His first appearance was in Hellblazer issue 42.

When he first appears Brendan is a brown-haired man in his early 40s with a sizeable beer gut - a product of his alcoholism. After dying and returning as a ghost, Finn remains a little portly but generally appears younger, slimmer and healthier - well, aside from being dead - than before.

Brendan is an affable and generally good-natured man with a good sense of humour and a penchant for drinking Irish stout. However, his larger-than-life personality sometimes causes conflict with other, similarly bold characters like Jerry O'Flynn, against whom he maintained a long-standing grudge. And while he's generally a good sort, Brendan does have his dark side - he's a womaniser, having cheated on then-girlfriend Kit Ryan at least once, and would often get himself involved in Constantine's dodgy dealing.

John met Brendan in a punk pub at some point in the late 70s. John was in Mucous Membrane at the time, while Brendan was managing a terrible band called The Squitters. (Hellblazer issue 75, 1994)

Years later, in 1980, John went to visit Brendan at his cottage off the coast of Ireland. It was there that he first met an 18-year-old Kit Ryan, who was at that point Brendan's girlfriend. (Hellblazer issue 75, 1994)

In 1982 Brendan, along with Header and Rick the Vic, helped Constantine bind a demon in the body of Ronnie Cooper, the accidentally killed son of a gangland boss. (Hellblazer issue 130, 1998)

Around 1983, Brendan, John and a man named Cox were employed by Jerry O'Flynn to acquire The Ace of Winchesters, a magical gun, from a man named Zeerke. After Zeerke doubled the asking price, John and Brendan stole it instead. Zeerke went after them and held Cox hostage, but panicked and blew a hole in Cox's groin with a shotgun before fleeing. Brendan, horrified, took the gun and mercy-killed Cox, an act that haunts him to this day. (Hellblazer issue 76, 1994)

At some point prior to 1991, Brendan sold his soul to The First of the Fallen in exchange for the biggest wine collection in the world. John, not knowing, visited Brendan hoping to find a cure for his lung cancer. Upon finding out that his friend was to die that night, John instead joined him in one last drinking session. However, not wanting Brendan's soul to be confined to Hell, John tricked The First of the Fallen into failing to claim Brendan's soul at the stroke of midnight. As a result, the Irishman was sent to Heaven instead. (Hellblazer issue 42, 1991)

After dealing with some trouble in New York, John made a brief stopover in Dublin. There he was surprised to meet Brendan, who had come down from Heaven in spirit form for a drinking session. (Hellblazer issue 76, 1994)

Brendan made a couple more appearances over the years; once in a bar for the dead (Hellblazer issue 120, 1997) and once more as a vision (Hellblazer issue 222, 2006) but didn't make a proper appearance until 2011's issue 275 when he joined John - in ghost form once more - on his stag night before his marriage to Epiphany Greaves. Brendan was last seen helping a drunken Chas Chandler get home.