View source
The Books of Magic: Life During Wartime 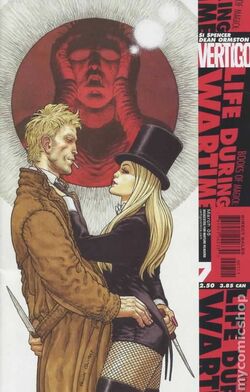 Books of Magick: Life During Wartime is a fantasy comic book series published by DC Comics under their Vertigo imprint in 2004 and 2005 that was discontinued after fifteen issues.

All of the issues are written by Si Spencer, with some script consultation done by Neil Gaiman. The artwork is done solo by Dean Ormston throughout most of the series' run. Steve Yeowell is co-credited as an artist in issues eleven and twelve and Duncan Fegredo fully replaces Ormston for issues six and ten.

The series depicts the events that take place on two fictional worlds, both of which are connected through an alternate version of the character Timothy Hunter.

When Timothy Hunter first appeared he was a young boy who had the potential to be the world's most powerful magic user. He starred in his own series titled The Books of Magic. Over the course of the character's history he changed and aged.