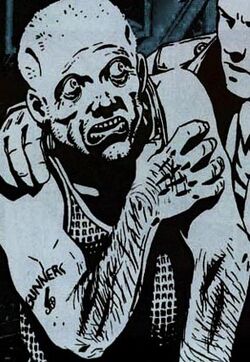 Beano's appearances in the modern day show him to be shaven-headed, of medium-to-large build, with an Arsenal tattoo on his right arm. His appearances in flashbacks to his Mucous Membrane days show him to have grey (presumably dyed) hair and sunglasses on at all times.

Beano's personality in the flashbacks is not really defined - he's just a member of the band. However, in Hellblazer issue 77 he is a pathetic, needy shell of a man driven to the edge of madness by a heroin addiction and a pair of ghosts in his home. His appearance in Hellblazer issue 174 shows him to have gotten a lot of his edge back, attempting to manipulate people and demons much like Constantine - but with considerably less success. His attitude in this story is cold and ruthless.

Beano is treated with little respect by Constantine in issue 77, but John nevertheless invites him to his wedding.

Very little is known about Beano's life before joining Mucous Membrane. What is known is that he was the drummer for the band throughout most, if not all, of their appearances. Later, after the band broke up, he took up heroin and became a shell of a man, eventually losing his girlfriend. (Hellblazer issue 77, 1995)

Just before his girlfriend left, she contacted John to say that Beano needed his help; a ghost in his house was pushing Beano to the edge of sanity. John discovered that there were two ghosts - a murderer and his victim - and sent them to their repsective places in the afterlife. (Hellblazer issue 77, 1995)

After this, Beano managed to get himself off heroin and joined The Church of Jesus Christ of the Latter-Day saints, for whom he handed out pamphlets. (Hellblazer issue 245, 2008)

By 2010, however, Beano had left the church and taken up demonology, just like his old band members (he'd also put on considerably more weight). This apparently involved tricking a man into thinking he was Gary Lester and covering him in jam to attract flies, in a vague recreation of the Mnemoth attack in New York from Hellblazer issue two. However the summoning went wrong and instead he attracted The Demon Constantine, who killed the fake Gary before breaking Beano's neck. Beano was also working with an as-yet-unidentified man on this project who escaped unscathed. (Hellblazer issue 274, 2010)