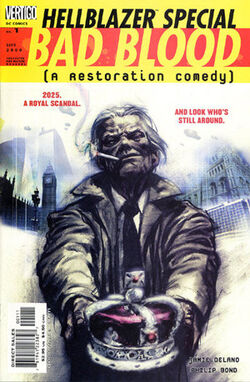 In the year 2025, an elderly John Constantine has forsaken the world of magic. The monarchy of the United Kingdom is sputtering out, and John's friend Dolly is being held captive on a reality TV show that revolves around the premise that she is the sole heir to the English throne. Numerous interest groups of the pro- and anti-monarchy variety attempt to influence the show in the direction they favor. After Dolly is rescued by Constantine, she reveals that he is the father of her unborn child. Constantine is then faced with the decision of whether or not he wants his progeny crowned king of England.