View source
All His Engines 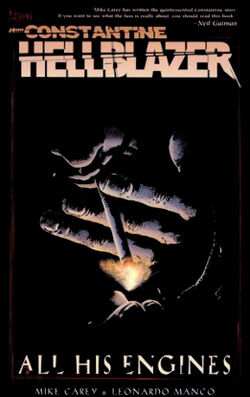 With a plague of comas seizing the world, John Constantine and his best friend Chas Chandler travel from the UK to Los Angeles to try to discern its origin. They unwittingly step into a war between gods, most notably Mictlantecuhtli , the Aztec deity of death, who resents Constantine's intrusion into his business. Beroul , a demon who behaves as if he were a Hollywood movie executive, holds hostage the soul of Chas' granddaughter Trish .

Constantine can get her back, if he disposes of Beroul's enemies, which he eventually does by enlisting the help of Mictlantecuhtli. Constantine is able to trick his way out of the bargain, however. The story begins on a dark night in Liverpool in August 1961. As the clouds in the sky begin to take strange forms, we see that the shapes are transpiring above the home of a young John Constantine. He is awake in his bed and believes the noises coming from outside his window to be from his sister, Cheryl , breaking in after curfew. Suddenly, however, an enormous skeleton-like creature manifests itself on Constantine's bed and demands that he hand over something better than his own immortal soul. The frieghtened Constantine screams at the sight of the monster and it disappears.

However, John's father comes into the room and, despite his pleads that a ghost had been in his room, scolds John for waking him up at such an hour. A confused Constantine is left staring out his bedroom window. The focus of the story then shifts to the home of Geraldine Chandler, Chas' daughter in the fall of 2004. Her ex-husband is screaming at her to see his daughter, Tricia , as she apparently should be ready to leave with him. Finally, he storms into the house to force his daughter out with him. However, when he and Geraldine enter her bedroom they are shocked to find Tricia motionless and unresponsive on her bedroom floor. Following a trip to the hospital, the entire Chandler family, Chas included, is seated in the waiting room of the hospital, discussing Tricia's condition.

As tensions arise between Chas and Geraldine's ex, Constantine arrives to the hospital to offer his hand in helping Tricia. Immediately, however, Chas' wife, Renee rejects his help and demands that he not go anywhere near Tricia. Following this outburst, Chas explains to John that his granddaughter is in critical condition and that the doctors are clueless as to why. Desperate for an answer, Chas calls on Constantine for help, fearing the possible cause to be supernatural. John agrees, but warns Chas that things might get very difficult as he goes deeper into this mystery and that he will need a driver. Chas agrees and the two leave the hospital to seek answers. The first place that the two visit is the home of an old friend of Constantine's named Fennel . On the way there, Constantine suffers a flashback in which he is arm wrestling a supposed friend of his. After taking the man's concentration away from the armwrestling match they are having, John ends up the winner. The man is furious with him and prepares to stab him when Chas interviens and the pair end up against every other man in the room. Suddenly, all the men in the room save for John and Chas begin to wither away and die. Once again, the same enormous skeleton-like being appears in the house and once more demands something from Constantine. Back in Chas' car, John begins to strain himself as he refuses to believe the events of the flashback actually happened. Once inside Fennel's house, John wisecracks his way into getting his friend to help him. Fennel is apparently a powerful psychic, which John intends to exploit for his own gain. The two set up the necessary environment and begin a seance of sorts in order to contact Tricia. When Fennel finally reaches her, she reveals that she is in chains and that the only one who she's seen so far is the 'nasty man'. Before revealing who this man is, he forces his control onto Fennel and tells Constantine that what's his is his. Unfortunately, the stress is too much for Fennel's body and he explodes in a storm of fire, leaving only a burning address in the floor of Fennel's home. This address is one that exists in Los Angeles , where Chas and Constantine prepare to go. Following a troubling flight for Chas, the two arrive at the Los Angeles airport, intent on seeking the address. After acquiring a vehicle, Chas drives Constantine to the address they seek. At this address, a large mansion sits atop a hill and is adorned with many tacky lawn ornaments.