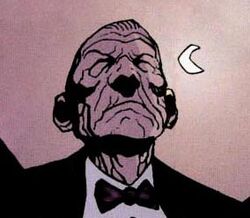 Albert Case is a magician, a member of The Tate Club and a companion of Clarice Sackville. He first appeared in Hellblazer issue 134.

When he first appears, Albert is an elderly man of around 70 or 80 years. In his initial appearances he is foul-mouthed and short-tempered with a broad Cockney accent, but his subsequent appearances under Mike Carey's pen portray him as being more composed and and civil. Albert is always shown to be well-dressed.

Little is known about Albert's past, although it was explained in Hellblazer issue 134 that he was court magician to the infamous Kray twins that ran much of London's criminal underworld in the 1960s. In Hellblazer issue 178 he pulls 'an old fakir trick' suggesting that he has studied under magicians in India - or at least has a broad view of such things. At some point he became a companion of Clarice Sackville, whom he is rarely seen without. The pair are members of The Tate Club.

Constantine first met Albert while he was investigating the murder of his ex-girlfriend, Isabel Bracknell. John hoped that avenging her death would allow her ghost to release its hold on the world and enter the afterlife. Clarice and other mages helped John get revenge on the killer, but Isabel's ghost would not move on. To help her, John enlisted Albert's help; Albert then projected his spirit, took the girl's hand and led her into the afterlife.(Hellblazer issue 134-139)

While this implied that Albert may have been a ghost himself, his subsequent appearances made it quite clear that he had a physical form. He next turned up in the Red Sepulchre arc, as John Constantine found himself stuck between a vicious gangster named Domine Fredericks and the combined forces of The Tate Club - with Albert counselling Clarice not to trust John. After Fredericks' men attacked the Tate, Albert was able to get himself and Clarice to safety and together they raised a demon to attack Fredericks' place. After Fredericks was disposed with - thanks to some clever work on John's part - Albert told him that Fredericks had been having dreams about a monster known as The Shadow Dog. (Hellblazer issue 177-180)

Years later, John contacted Clarice and Albert again to ask for help with his three demonic children, Adam, Saul and Maria. As the three left The Tate Club Adam cast a spell that caused a tornado of broken glass to whirl through the street, shredding everyone in it. Albert managed to push Clarice inside the Tate, saving her life, but was ripped to shreds immediately afterwards. (Hellblazer issue 202)

Albert makes a reapparance in The Hellblazer issue 2 but was later killed in the next issue by a djinn.