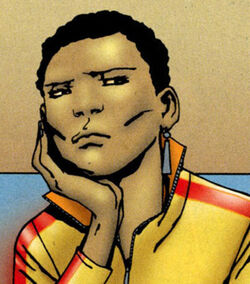 Aisha is a doctor and the best friend of Phoebe Clifton-Avery. She first appeared in Hellblazer issue 251.

When first seen, Aisha is in her 30s, with short black hair. She generally wears brighter and more fashionable clothing than Phoebe.

Aisha is an extremely loyal and protective friend and develops a deep and instinctive distrust of John Constantine after he starts dating Phoebe. She has a sharp tongue and doesn't hesitate to use it on John. Aisha is extremely outgoing and highly sexed.

Aisha is first seen out on the town with Phoebe, where the two discuss Phoebe's relationship with John and the abortion that Phoebe had some years ago. After Phoebe has a run-in with a scab child representing her guilt over the abortion, she stays overnight at Aisha's - and Aisha makes it quite clear what she thinks of John. (Hellblazer issue 251-252, 2009)

After Phoebe dumps Constantine, Aisha comes around for a girls' night in. She supports Phoebe's decision to dump John and says that he was probably just looking to get into some easy money - Phoebe's family being very rich. John comes around to give Phoebe a bottle of wine that he's dosed with a love potion and, suspicious, she gives it to Aisha to analyse. Aisha finds odd compounds in the wine, but nothing she can identify. After a brief confrontation with John in the hospital, Aisha doesn't see him again until she walks into Phoebe's flat and finds John with her body. Aisha blames John for murdering her (actually, it was Julian) and calls the police. John forces her out of the house while he supernaturally stops the decay process. Fearing for her life, Aisha stays outside until the police turn up. She later attends Phoebe's funeral, where she tells Phoebe's father that she hopes the police catch John soon. (Hellblazer issue 256-258, 2009)