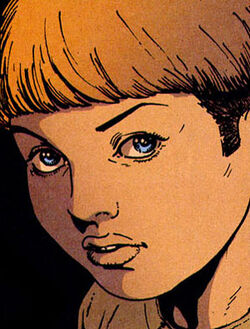 Adam Constantine is, along with Maria and Saul, one of three children conceived by John Constantine and the demon Rosacarnis. He first appeared in Hellblazer issue 200.

Despite being demon (or possibly half-demon; his exact status is unclear), Adam takes the form of a little boy around five years old. Nevertheless, he has a psychopathic devotion to his mother, and is entirely capable of killing dozens of people - which is precisely what he does to several of Constantine's friends.

Adam was conceived, born and grew up in a pocket dimension created by his mother, Rosacarnis, as part of a scheme to conceive three children with John Constantine who would then know him and his life well enough to destroy him. This was all to get revenge on John for killing Nergal, Rosa's father. In this alternate dimension Rosa took the form of Kit Ryan and married John. In this alternative reality John had given up magic and was struggling to make money through gambling, while 'Kit' had started working at Chas's cab company. (Hellblazer issue 200, 2004)

Not much is known about Adam's 'youth' in the bubble dimension, but we do know that in this alternate world he grew up as a largely normal boy until around the age of five, when he used psychic powers to force his nursery teacher to inject herself with drain cleaner. Later, after John was menaced by thugs wanting him to pay gambling debts, Adam used these powers again to force one of them to shoot his colleagues and himself against his will. John returned home to find that Adam had scared his babysitter to death by making her hallucinate. John was barely able to react before Adam and 'Kit' killed him, sending him on to another bubble dimension where another son, Saul, waited to grow up. (Hellblazer issue 200, 2004)

After entering the real world, Adam and his siblings, Maria and Saul, under orders from Rosa, then began a wholesale slaughter of John's friends and acquaintances. Adam's victims included Albert Case, whom he shredded (along with several hapless passers-by) with a storm of broken glass. (Hellblazer issue 202-Hellblazer issue 205, 2004-2005)

John went to Hell to reclaim his sister's soul, which had been taken from her body at the point of death. There, he encountered his children once more, as well as Rosa and her father, Nergal. A tense stand-off was broken by The First of the Fallen, who killed Nergal, Rosa, Saul and Adam, reducing the latter two to ash. (Hellblazer issue 212, 2005)