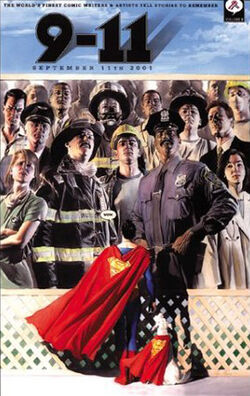 9-11 Volume 2 was released to raise money for 9/11 support charities. It features 39 stories and even more art pieces relating to the destruction of New York's World Trade Center and the attack on the Pentagon. As well as completely original stories there are many that feature DC Comics and Wildstorm characters, including John Constantine.

And Superman bemoans the fact that he's 'Unreal'.

Back in London for the first time in ages, John Constantine meets up with Paul, a friend and voodoo practitioner turned insurance executive. Paul tells him about the day after the towers fell: his boss, Vivienne, called everyone into the office and announced that their business had been exposed to the financial fallout from the towers, but that they could minimise the damage by sticking tightly to the rules. Which meant demanding full documentation for every claim - including documents that were destroyed in the WTC collapses.

Paul objected but was overruled. John says that he should have let it go, but Paul says that this time had to be different - it couldn't just be another horrific event where everyone cries and moves on. A couple of days later he brought her a claim for a young boy who'd lost his legs after his step-mother took him to the WTC for a trip. Vivienne was unmoved until she found out that the step-mother was her estranged sister.

She immediately had a change of heart and declared that claims could be passed based on file copies rather than original documents. John compliments his detective work but Paul says that it was just a lie that he'd fabricated. Finishing his drink, Paul gets up and leaves. The barman asks John, 'Same again?' 'Well,' says John, 'that's the big question.'